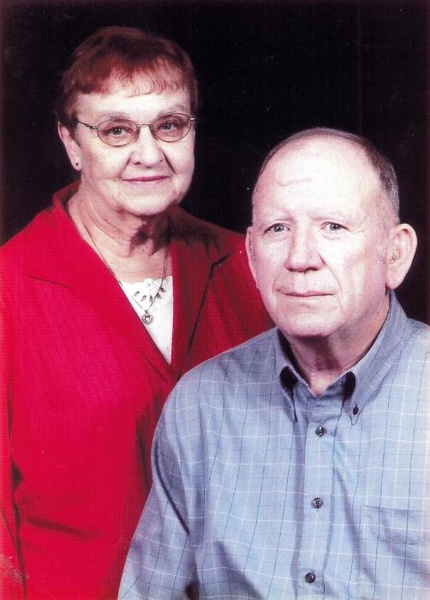 Larry was born on June 2, 1943 in Blythewood, South Carolina and was one of nine children.  He served in the Air Force and was stationed in Alaska for a short period of time. In 1966 he was honorably discharged in Topeka at Forbes Field. After leaving the Air Force he owned and operated a tire store in Holton, KS where he met Eunice.

Larry worked many years in Sabetha at Mid America Dairyman, IMAC, and as a mechanic at the Amoco station. After he retired he went to work at Country Mart where he worked until November of this year and spoiled many young children with his candy treats as they came through the aisle. He also volunteered time as a coach for little league baseball and served his church through various positions within the congregation.

Eunice was born on July 30, 1934 in Bern, KS. Eunice graduated from Humboldt High School in Humboldt, Nebraska. After high school she began teaching in a one room school and taught many different grades. Later on, Eunice worked as a waitress at Trails Cafe in Holton where she met Larry.  Eunice had other work she did in Sabetha including as a waitress at M & M Cafe, a checker at Safeway, and most recently as a CNA at the Apostolic Christian Home where she retired in the middle 1990’s.

Larry and Eunice were married on December 19, 1970 and are survived by Larry’s sisters, Esther Thomas, Sue Brown, Sylvia Browning, and Rebecca (Beck) Gunther all of South Carolina. Eunice’s sisters, Jean Troxell of Nebraska, Joyce Lamphier of West Virginia, Janice Backer of Sabetha and brother, Timothy Todd of Colorado. Two daughters, Joy (Bitterman) Pusch and her husband, Roger of Topeka, KS, and Tomilee (Bitterman) Stump of Grove, OK; as well as sons, Michael Bitterman and his wife, Kay of Sabetha, KS, Cory Bass and his wife, Angie of Seneca, KS, and Joel Bass; many grandchildren, and great grandchildren.

Private Family Services will be held Friday, December 4, 2020 at the Popkess Mortuary Chapel in Sabetha. Interment will be made at the Sabetha Cemetery. In lieu of flowers, donations can be made in honor of Larry and Eunice Bass to Sabetha’s Neighbor 2 Neighbor program, sent in care of Popkess Mortuary, 823 Virginia Street, Sabetha, KS 66534.