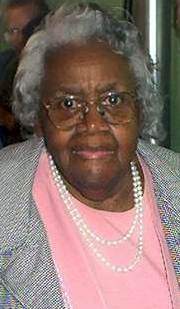 L ela Lucille Brooks, of Sabetha died Monday, February 9, 2015 at the Apostolic Christian Home at the age of 104, where she had been a resident since February 2010.

She was born on March 21, 1910 to Lucinda (Davis) Ellington and James Ellington in Sabetha, Kansas. Lela lived her entire life in the Sabetha area.  She was united in marriage to John “Johnny” Brooks on July 30, 1940. To this union was born two sons, Keith and Ronald Brooks.

She was an active member of the Eastern Star #30 Chapter for over 50 years until her health failed.  Lela dedicated her life to Christ at an early age and was a member of Parks Chapel African Methodist Episcopal Church in Sabetha for over 90 plus years.

To order memorial trees or send flowers to the family in memory of Lela Brooks, please visit our flower store.