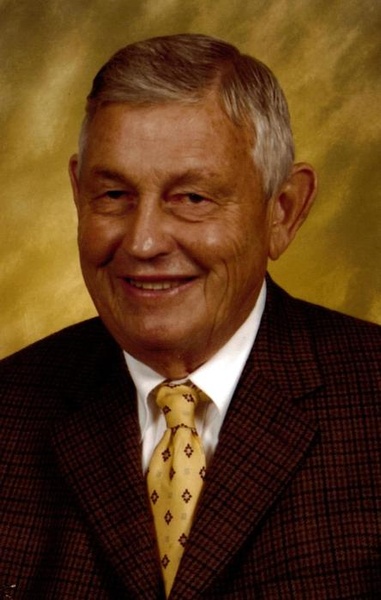 Leland, along with his twin brother Leo, was born to Roy and Lydia (Ledbetter) Snyder in Morrill, Kansas on November 14, 1931.

When Leland was in high school, he and his brother Leo made their home with Lee “Doc” and Lydia Wenger in the Morrill community. Doc and Lydia were like parents to the boys and like grandparents to Leland and Leo’s children. The twins graduated from Morrill High School in 1949.

Leland married Nila Edelman on December 10, 1953. Nila and Leland settled in the Rock Creek community for over 60 years, moving to Sabetha in September of 2015.

Leland and Nila enjoyed traveling and attending the various activities their grandchildren participated in. He was an avid fan of K-State and of Duke. He was a meticulous farmer and stockman.

He loved his children and grandchildren so much. He had a love for animals, especially his dog, Lola (his companion), with whom he was always extravagant with treats. His family considered him their own dog whisperer.

Leland was a member of the First United Methodist Church of Sabetha, and he was a lifetime member of the American Legion and the VFW. He served on the Farmer’s Co-op board and the board of the Federal Land Bank.

Funeral service will be Monday, January 11, 2016 at 11:00 a.m. at the First United Methodist Church in Sabetha.  A visitation will be from 10:00 a.m. to service time at the church.  The interment will be made in the Albany Cemetery.  Memorial contributions may be made to the Sabetha Community Hospital, Apostolic Christian Home or the First United Methodist Church  sent in care of the funeral home, 823 Virginia, Sabetha, Kansas  66534.

To order memorial trees or send flowers to the family in memory of Leland Snyder, please visit our flower store.