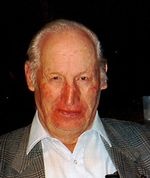 Leo Henry Jurgensmeier was born on October 20, 1925 the son of Bernard J. Jurgensmeier and Helena E. Riemann Jurgensmeier at Auburn, Nebraska. Leo was baptized into the Catholic Church at Auburn, Nebraska. The family moved to White Lake, South Dakota in 1931; then to Fidelity (Sabetha) Kansas in 1933. The family has attended St. Augustine Catholic Church of Fidelity since 1933. Leo spent 3 years in the Catholic school, then moved near Fairview, Kansas, attended school there and graduated from Fairview grade school in 1938 and then Fairview High School in 1942. Leo belonged to the Kansas State Guard until being inducted into the United States Army and received an honorable discharge in August of 1945. Leo became a charter member of the Fairview America Legion Post #322 in 1948. Leo helped form the Knights of Columbus in Horton, Kansas in 1949 and later transferred his membership to become a charter member of the Hiawatha Knights of Columbus Council #8505. In 1990 he transferred and became a charter member of Father Placidus Kieffer Sabetha/Fidelity Knights of Columbus Council #10279. Leo became a 4th degree member of the Knights of Columbus on June 14, 1992.


On March 25, 1969 Leo was united in marriage to Mary Joan Lero Baker at Saint Augustine Catholic Church at Fidelity and became stepfather to Mary's seven children. Leo and Mary farmed in the Fairview area all of there marriage.


Leo died on June 27, 2009 at the Apostolic Christian Home in Sabetha at the age of 83. He was preceded in death by his parents; a step son, Lawrence Baker in December of 1989; a brother, Eugene Jurgensmeier in March of 2000. He is survived by his wife, Mary of Sabetha, Kansas; 3 step daughters, Mary Baker Schroeger, Marcella Baker Kirkpatrick and Geraldine Baker Rogers; 3 step sons, Pat Baker, Leo Baker and Gerald Baker: 5 sisters, Evelyn Suther of Wetmore, Kansas, Viola Peters of Overland Park, Kansas, Helen Skinner of Fairview, Kansas, Bernice Newman of Albuquerque, New Mexico and Lois Bindel of Sabetha, Kansas; two brothers, Raymond Jurgensmeier of Fairview, Kansas and LeRoy Jurgensmeier of Topeka, Kansas and 24 grandchildren, 39 great grandchildren and 1 great great granddaughter.

To order memorial trees or send flowers to the family in memory of Leo Jurgensmeier, please visit our flower store.