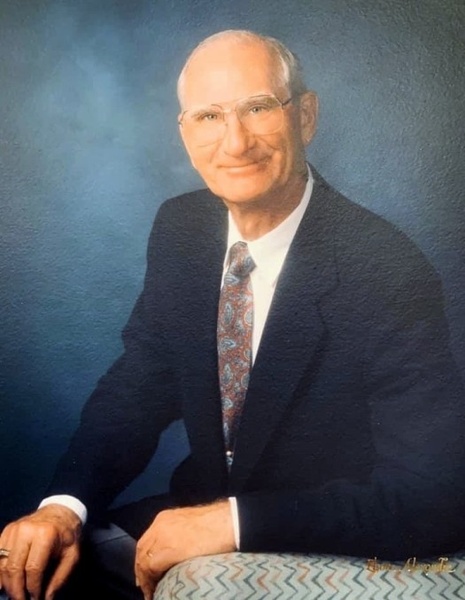 L eon Joseph Schmidt, child of God, died peacefully in his home in Daytona Beach Shores, Florida on July 30, 2020. He was 93 years of age.

Leon was born in 1926 in Nortonville, KS to Leo Peter Schmidt and Anna Eva Weishaar Schmidt. He spent his young life there until the family moved to Atchison in 1933. There, he attended Saint Benedict’s school with his brothers Jerry, Bill and his sister Lucy . He then attended and graduated from Maur Hill Prep School in 1944, where he was valedictorian of his class and co-captain of the undefeated football team. Immediately after, he joined the U.S. Army and, through them, attended classes at the University of Kansas, Wyoming University, and Officer Candidate School in Fort Benning, GA.

Returning to his native Kansas, Leon married his high school sweetheart, Mary Lou Enright, daughter of Thomas Francis Enright and Ella Gertrude Scarlett. They were married at Saint Benedict’s church in Atchison on April 23, 1947. Together, they raised a large and vibrant family that included children Steve, Mike, Sue, Kathy and Jim.  Leon found work in a handful of extended-family businesses ranging from farm work to delivery trucking to tire sales. From 1950-1984, he joined his uncle Joe Weishaar in operating and managing Valley Implement, Inc. During their years in Valley Falls, Leon served as Scoutmaster for eleven years, and as District Chairman for the Jayhawk Area Council of the Boy Scouts of America for an additional 12 years. He was a member of the Mic O Say Tribe and Order of the Arrow. He received many BSA awards for training others including The Wood Badge and the The Silver Beaver Award. He also served as President of the Valley Falls Chamber of Commerce and the Valley Falls Lions Club, and was a City Planning Commissioner. He was a charter member of the Lions Club and the Knights of Columbus, and worked to establish Little League baseball in the Jefferson County area.

After the difficult business closing of Valley Implement, Inc., Leon and Mary Lou moved to Florida in 1984. With a new lease on life, they lived happily for years together in Apopka, FL, where he became a founding partner of Keenan, Hopkins, Schmidt & Stowell, an Orlando-based contracting firm specializing in commercial and industrial design and building projects. Among their many clients were Disney World Magic Kingdom, Disney Tour Studio, Universal Studios, Sea World, and Epcot Center. Mary Lou passed away suddenly at their Apopka home in 1992.

Soon after, Leon re-connected with and married a lifelong friend, Marjorie Hildebrandt Benson, who had also recently lost her husband, Bob. They moved to Daytona Beach Shores together and enjoyed many happy years living and serving in the community there. They were active members of the local Catholic Church of the Epiphany where Leon took a great interest in managing and stocking the church’s Food Pantry. They were familiar faces around town, frequenting the Eagles Lodge, the Elks Lodge, and a few local golf clubs. Leon and Marjorie also kept a home near many of their respective children in Lawrence, KS. Marjorie passed away peacefully there in Lawrence in 2016, and Leon returned to living mostly in Daytona Beach Shores after her passing.

He is survived by his brother Jerome Paul, and by his five children: Steve, Mike (Gail Vessels), Sue (Larry Shepard), Kathy (Bill Simpson), and Jim (John Burns). He is also survived by Marjorie’s children: Nancy Benson (JT Bradley) and Patti Benson, and by his many loving grand- and great-grandchildren. Leon referred to them as “the jewels in my crown”.

The family has chosen two organizations for those wishing to honor Leon’s passing with a memorial gift. The Food Pantry of the Church of the Epiphany in Port Orange, Florida was a big part of Leon’s life and personal ministry. Gifts to benefit the pantry can be made via the church’s website: https://www.osvonlinegiving.com/1800/Home/NewQuickGive. You may reach them by phone at (386) 767-6111, if you wish. The other organization chosen for memorial gifts is Maur Hill - Mount Academy in Atchison, KS. Leon attended school there as a boy, and his tuition was paid by an anonymous donor. Though he never learned who put him through school, he always spoke of his time there as a life-altering opportunity for him. Gifts benefiting their Tuition Assistance program can be sent to: Maur Hill - Mount Academy, 1000 Green St., Atchison, KS 66002. You may reach them by phone at (913) 367-5482, if you wish.

Though we will miss him dearly, our hearts are at peace knowing Leon, a man of great faith, is now where he had always dreamed of, walking with God.

To order memorial trees or send flowers to the family in memory of Leon Schmidt, please visit our flower store.