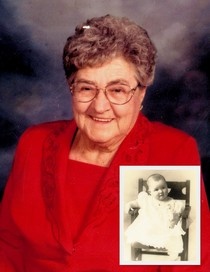 Leota was active in the Methodist Church, Helping Hands Sunday School Class and the Better Homes Unit for 20 years.

She worked many jobs through the years including Big B Super Market, IGA and Bern Meat Locker; all as a meat wrapper, helping in school lunch room and was a substitute postal carrier.

Hobbies were sewing, quilting, embroidery and she loved to tend her garden and flowers.  She always said wore out her knees dancing and also enjoyed playing cards.

To order memorial trees or send flowers to the family in memory of Leota Kuenzi, please visit our flower store.