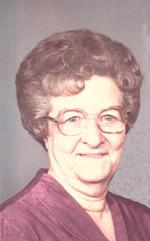 Leota Ruth Matthews, 96, of Centralia, passed away Thursday, June 16, 2011. She was born July 22, 1914 in Centralia, Kansas, the 2 nd child of 8 children to Clyde and Laura (McCaig) Yarger. She grew up on the family farm northwest of Centralia.

She attended elementary and high school in Centralia and was the valedictorian of the 1932 graduating class. Leota received a Normal Training certificate and taught several years in the rural schools of Nemaha County. She later attended Emporia State University and received her Bachelor’s Degree in Elementary Education. She taught in Sedan, Marysville, Centralia and Frankfort, Kansas. Leota retired from the Centralia and Frankfort Schools where she had taught kindergarten for many years.

Leota and Samuel were custodians for the First National Bank of Centralia. They retired in 1993 after 20 years of service.

Leota was an active member of the UCC First Congregational Church and Women’s Fellowship of Centralia.

In 1943 Leota met and married Sfc. Samuel Matthews. They had one son, Allan Matthews. They resided in Louisiana until Samuel was called into combat during WWII. Upon his return they resided in Fort Campbell, Kentucky. There Leota taught in the Army Dependents School until she joined her husband in Germany. Leota also taught in the Army Dependents School in Karlsruhe and Kaiserslautern, Germany. After Samuel’s retirement in 1957 they returned to make their home in Centralia.

Leota is survived by her husband, Samuel of Centralia, KS; a son Allen (Ann) of Netawaka, KS; a grandson, Sidney and two great grandsons. She is also survived by four sister; Emma Gandy, Kansas City, MO, Fern Weyer of Baileyville, KS, Audrey Chestnut and Mildred Chatham, Topeka, KS. She was preceded in death by two sisters and one brother.

Funeral services will be Tuesday, June 21, 2011 at 11:00 AM at the UCC First Congregational Church in Centralia. A family visitation will be held at the church one hour prior to the service. Burial will be at the Centralia Cemetery. Memorials are being left to the UCC First Congregational Church  and may be sent in care of the Hayes-Popkess Funeral Home (Mailing address – 814 Castle, Seneca, KS 66538).

To order memorial trees or send flowers to the family in memory of Leota Matthews, please visit our flower store.