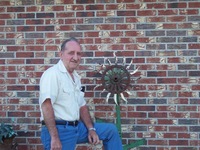 LeRoy was born in Seneca on September 27, 1936, to William and Bessie (Edie) Slack.  He grew up on the west outskirts of Seneca, and attended schools in Seneca.

LeRoy married Erma Wilburn in 1964 and was a brick layer for 30 years.  He lived all of his years in Seneca, except for the eight years he served in the United States Air Force.

LeRoy was a member of the American Legion for many years and a lifetime member of the VFW.  He loved fishing and playing cards.  In the later years he enjoyed "animal daycare".

LeRoy was preceded in death by his wife Erma, his parents William and Bessie; his brothers, Charles Slack and Otto Slack, and sister Mary Ann Gyrha.

To order memorial trees or send flowers to the family in memory of LeRoy Slack, please visit our flower store.