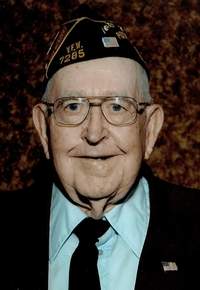 L eRoy A Strahm, 93, of Sabetha passed away Saturday morning, September 28, 2013 at a Topeka hospital.

He was born at home in rural Sabetha to Eli and Minnie (Stoldt) Strahm on May 22, 1920. He enjoyed growing up as an older brother to his four sisters and working with his parents on the farm. In 1942, LeRoy joined the United States Marine Corp as a private first class. After training in San Diego, he proudly served throughout the South Pacific during WWII. He was honorably discharged as a corporal in January 1946.

On October 5, 1947, LeRoy married Wilma Walker. During 66 years of being happily married, LeRoy and Wilma had two children, six grandchildren, and nine great-grandchildren. Leroy worked hard to take care of his family and provide for them by farming and then owning the Strahm Service Station in Sabetha for many years. After retirement, LeRoy loved to spend his time fishing, gardening, growing roses for Wilma, cracking walnuts, and spending time with his family.

Preceding him in death were his sisters, Millie Stalder and Ann Fenton.

Funeral service will be Wednesday, October 2, 2013 at 10:30 a.m. at the Popkess Mortuary in Sabetha. Visitation will be Tuesday, October 1, 2013 from 6:30-8:00 p.m. at the Popkess Mortuary Chapel in Sabetha. The interment will be in the Sabetha Cemetery with military honors conducted by the Sabetha VFW Post #7285. Memorial contributions can be sent to the Sabetha VFW Post #7285, sent in care of the funeral home, 823 Virginia, Sabetha, Kansas 66534.

To order memorial trees or send flowers to the family in memory of LeRoy Strahm, please visit our flower store.