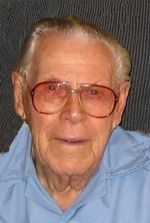 Lewis was born November 22, 1922 near Bellaire, Kansas the son of Lewis William Shields and Flora Tripp Shields. Lewis graduated from Smith Center High School in 1940. He entered the United States Army in 1943 and served in Germany and England during World War II.

On January 2 in 1943 he married Juyne Harral in Papillion, Nebraska. To this union was born a daughter, Virginia. Juyne preceded Lewis in death.

Lewis was raised and worked on a farm in Smith County, Kansas until 1949. From 1949 to 1961 Lewis worked for the Kansas Highway Department. During this time he studied and obtained his Engineer license. In 1961 he became County Engineer of Decator County in Oberlin, Kansas and later worked as an engineer in Seneca, Marysville and Fort Scott until his retirement.

Lewis and Ella Mae moved to Mission Texas a short time after his retirement from County engineer and lived there for many years where Lewis worked part-time doing surveys and helping plan retirement parks as well as other various jobs.

In 2003 Lewis moved to Lakeview Arkansas to be near his stepson Deland during Ella Mae's illness and subsequent death in November 2003. A few months, following her death and due to Lewis's failing health, he once again moved to live with his daughter Virginia and her husband in California. Then in 2008 they all moved to Omaha, NE.

Lewis is preceded in death by his wife Ella Mae Shields, a brother, Merrill Shields, and a sister, Velma Williams.

Lewis is survived by a daughter Virginia and son in law Danny Brake of Omaha, NE; a grandson Timothy Tompkins and wife Laurel of Palm Desert, CA; great-grandchildren: Timberly Tompkins, Dakota Bokemeier, and Annika Bokemeier; a second grandson, Shaun Tompkins of Broomfield; CO; a stepson, Deland Cooper and wife Glenda of Mountain Home, AR and grand daughters, Lisa, Darcy and Delane. He also leaves many nieces, nephews and friends who will mourn his passing.

Lewis was a member of the Veteran of Foreign Wars and the American Legion Posts in Smith Center, KS and he was a 32nd Degree Mason and a Shriner.

Graveside services will be Thursday, July 9, 2009 at 3:00 PM at the Centralia Cemetery in Centralia, KS. Military honors will be performed by the Kansas National Guard and the Armstrong Moyer American Legion Post in Centralia.

Pastor B.J. Justice will conduct the services. Casket bearers are Shaun Tompkins, Jim Williams, Dennis Ice and Danny Brooks. Mr. Shields will lie in state at the Hayes-Popkess Funeral Home in Centralia all day Wednesday July 8, 2009 and until time for the service on Thursday.

The Hayes-Popkess Mortuary in Centralia, KS is in charge of the arrangements.

To order memorial trees or send flowers to the family in memory of Lewis Shields, please visit our flower store.