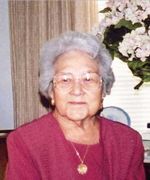 Lillian H. Brown, of Centralia, KS died Thursday morning at the Onaga Community Hospital in Onaga, KS. She was a 101 years of age.

Lillian was born July 12, 1908 the daughter of James Horalek and Barbara Vejvoda- Horalek in Elba, NE. She attended school in Elba until the family moved to Marshall County, KS. She continued her education in the Irving, KS schools and graduated in 1926. She received her teaching certificate after completing normal training at the Irving High school following graduation and was an elementary school teacher for two years. Following that, she moved to Centralia, KS where she worked in her brother Will Horalek's women's clothing store, Horalek's for the next 66 years.

Lillian married Lt. Kenneth R. Brown, U.S. Army, in 1943. When Kenneth returned to Centralia following the war, they bought the Centralia Telephone Exchange. They owned and operated that business until they sold it.

Funeral services for Lillian will be Monday at 10:00 AM at the United Methodist Church in Centralia. A visitation will be from 9:00 Am until the service time at the church. Burial will be in the Centralia Cemetery. Lillian will lie in state all day Sunday at the Hayes-Popkess Funeral Home in Centralia, KS.

Memorials are being left to the United Methodist Church, Centralia EMT's or the Eastridge Care Home all of Centralia.

To order memorial trees or send flowers to the family in memory of Lillian Brown, please visit our flower store.