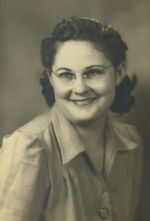 Lillian B. Young, 89, of Sabetha, died Wednesday, August 4, 2010 surrounded by loving family members at the Sabetha Community Hospital. Lillian, the daughter of Oliver and Lula (Jacobia) Gilbert, was born May 28, 1921 at Granada, Kansas. She was one of six children.

Until moving to the Apostolic Christian Home in Sabetha several years ago, she had resided in Seneca since 1960.

She married Noel F. Young on December 17, 1938 in Falls City, Nebraska. To this union, they had two sons while living in Sabetha where Noel was employed by Holdren Poultry. In 1950, the family moved to Bern where Noel and Lillian operated Young Produce. In 1960, they moved to Seneca and operated the business until 1968. Lillian was then employed at the Florence Ann Shoppe until 1988.

Lillian was a member of the Seneca United Methodist Church. She enjoyed cooking, collecting dolls, and painting landscapes and still life. One of her greatest joys was giving her paintings to friends and family members.

Preceding her in death were her parents, her husband Noel, her brother Alvin Gilbert, and her sisters Lola Porter, Grace Houchens, and Norma Jurgensmeier.

To order memorial trees or send flowers to the family in memory of Lillian Young, please visit our flower store.