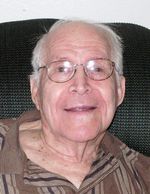 Upon graduation from Centralia High School in 1937 Mr. Smith was employed by Leeper Hardware in Centralia until he was drafted into the service. He served in the field artillery U.S. Army from 1942 to 1946. He was employed and worked for the Horalek Store in Centralia from 1946 until his retirement in 1991. Following his retirement he volunteered for Hospice. He had served as President of Leisure Lodges housing development board; past president Eastridge Care Facility Board; past president of Centralia Library board. He served in many offices for the Methodist Church including chairman of the administrative board. In addition to being a member of the United Methodist Church, Centralia he was a member of American Legion 216, Centralia; Order of Eastern Star No. 164 Marysville; The Masonic Lodge No. 39, Seneca. He was a past member of Centralia Booster Club, Charter member Lions Club, Church representative to the Boy Scouts and representative to the Girl Scout Council. Lloyd had also served on the Centralia City Council for over 10 years in earlier years.

He married the love of his life, Florence "Lucille" Smith in Wichita Falls, Texas on June 27, 1946. She preceded him in death on October 16, 2009. They were reunited in heaven on what would have been Lucille's 86th birthday.

Contributions may be made to the Centralia United Methodist Church or Eastridge Nursing Facility and sent in care of Hayes Popkess Funeral Home, Centralia.

To order memorial trees or send flowers to the family in memory of Lloyd Smith, please visit our flower store.