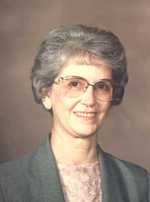 Lois was called home by the Lord, November 19th, 2011. She was residing at the Eastridge Skilled Nursing Facility, Centralia, Kansas.  Lois was born September 14, 1920, in Centralia, KS, to William Henry Searing, and Ethel Rasey Searing.  She was a lifelong resident of Centralia except for 4 years she spent at Vintage Park in Ottawa, KS.

In 1938 she married Travers Ayers.  They shared life until his death in 1977.  This union produced two children, Barbara and Bill Ayers.  Barbara Fangman-Metz resides in Prescott, AZ., and Bill Ayers lives in Ottawa, KS.

Lois was a very loving person and mother.  Her working career included, Ray's Cafe and Hightower-Haverkamp grocery in Centralia.  In later years, Lois served 8 years as House Mother for Gamma Phi Beta at Kansas State University. As a lifelong member of First Congregational United Church of Christ, Lois volunteered for any and all duties, including singing for various events.

She had a great love for family.  Among her loves were church, gardening and cooking.

A celebration of her life will be held at The First Congregational United Church of Christ, December 2, 2011, at 2 pm. Centralia, Kansas.  A private family ceremony will follow at the Centralia Cemetery.

In lieu of flowers memorials may be sent in care of First Congregational United Church of Christ, or Eastridge Skilled Nursing Facility, both in Centralia.

To order memorial trees or send flowers to the family in memory of Lois Ayers - Bachman, please visit our flower store.