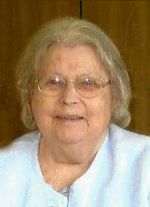 Lois "Lucille" White, 88, formerly of Vermillion, KS, passed away peacefully with her family by her side on Saturday, January, 23, 2010 at the Eastridge Nursing Facility in Centralia, KS.

Lucille was born August 15, 1921 at Vermillion, the daughter of Martin and Alice (Burell) Peterson. She grew up in the Vermillion area and attended school at the District 100 School near Vermillion.

She is preceded in death by her parents, two children, Daryl Armstrong Sr. and Goldie VanDorn, and a sister Dorothy Florence.
Lucille is survived by a son, Doris Armstrong and his wife DoVeta of Centralia, KS; four daughters, Linda Williams of Frankfort, KS, Alice Sauber and her husband Dan of Salina, KS, Edie Swanson wife of the late Everett Swanson of Frankfort, KS, and Carol Forgy and her husband Lonnie of Onaga, KS; a sister Dreda Selk of Wellsville, KS; twenty-two grandchildren, 31 great grandchildren and four great-great grandchildren.

Family will greet friends at a visitation Tuesday, January 26, 2010 from 6-8 PM at the Hayes-Popkess Funeral Home in Centralia, KS

Memorials are being left to the Lois Lucille White Memorial Fund; a specific charity will be chosen at a later date.

To order memorial trees or send flowers to the family in memory of Lois White, please visit our flower store.