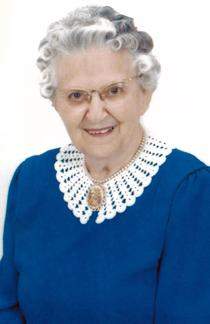 Miss Wenger was born June 1, 1917, to Ernest and Ethel Warner Wenger on the family farm, southeast of Powhattan, KS. She attended grammar school at Brown County District #44 and graduated from Fairview High School in 1936. After completing training at Strickler’s Business College in Topeka, KS, she was employed by local businesses until February 1941, when she reported to Fort Riley, KS, as a Clerk-Stenographer and began a 40-year career in Federal Civil Service. Loraine worked for the Corps of Engineers in Omaha, NE, and Kansas City, MO, then transferred to the Department of Health, Education and Welfare in Kansas City, MO, where she remained until her retirement in 1980.

Loraine loved to travel. She visited 48 states, including Hawaii and Alaska. She also enjoyed a voyage on the Mississippi Delta Queen, and cruises in Alaska and the Caribbean.

Loraine was confirmed at the Reformed Church in Fairview in 1934, and later attended Linwood Methodist Church in Kansas City. In 1977, she joined the Central Bible Church where she was baptized. After that congregation relocated, in 1984 she became one of the founding members of the Bible Missionary Fellowship in Kansas City, serving as church secretary until it disbanded.

An attentive daughter, she ministered to the needs of her aging parents, commuting from Topeka and later Kansas City, to the family home in Powhattan.  She was a faithful Christian friend to numerous acquaintances and enjoyed attending her school and family reunions.

Funeral service is Tuesday, September 23, 2014 at 1:00 p.m. at the Popkess Mortuary Chapel in Sabetha. A visitation will be from noon to service time.  The interment will be in the Powhattan Cemetery in Powhattan, Kansas.  Memorial contributions may be made to the Salvation Army sent in care of Popkess Mortuary, 823 Virginia Sabetha, Kansas  66534.

To order memorial trees or send flowers to the family in memory of Loraine "Birdie" Wenger, please visit our flower store.