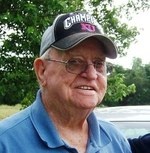 Louis was born June 6, 1921 in Linn, KS, the son of Floyd Hayes and Ethel (Atwood) Hayes. He attended Linn High School and graduated in 1939. He continued his education at Washburn University in Topeka, KS studying pre-medicine. While studying at Washburn Louis worked at the Penwell-Gabel Funeral Home in Topeka. While working there he began his interest in funeral service. Following Washburn Louis entered the service for four years. He served in the Ascension Islands during WWII. Upon his discharge from the service Louis enrolled in the St. Louis School of Embalming in St. Louis, MO. After completion of his schooling and apprenticeship, Louis purchased the funeral home in Centralia in 1948. He also opened a jewelry store and later a furniture store in Centralia all the while operating the funeral home until he sold the business to Roger Popkess in 1986.

Louis met Jeanne Virginia Bell in Linn and were married April 5, 1943 and had three boys; Mike, Jim and Kris.

Louis had served Centralia in many ways; he served on the City Council and instrumental in getting the pool in Centralia, he was President of the Lions Club and a member of the The Centralia Booster Club. He was a member of the NeMar Shrine, and the Arab Shrine of Topeka and the golf unit of the Shrine. He was also a long time member of the Armstrong Moyer American Legion Post of Centralia. Louis also attended the First Congregational United Church of Christ in Centralia, KS. Louis loved to golf and was an active member of the Seneca Golf Club for many years.

Louis is preceded in death by his wife Jeanne who died April 25, 2011.

He is survived by his three sons, Mike and Jan Hayes of Oskaloosa, KS, Jim and Debra Hayes of Topeka, KS and Dr. Kris Hayes of Moab UT; four grandchildren, Zach and his wife Melodie Weis, Lexi Jeanne Hayes, Beau and his wife Angie Hayes, and Nick and wife Kasey  Hayes; and a great-granddaughter, Olivia Weis.

Funeral services will be Monday, January 16, 2012 at 2:00 PM at the First Congregational United Church of Christ in Centralia. Dr. Scott Caulley will conduct the services. A family visitation will be before the service from 1:00-2:00 at the church. Burial will be in the Centralia Cemetery with Military Honors. Casket bearers will be Mike Hayes, Jim Hayes, Dr. Kris Hayes, Nick Hayes, Beau Hayes and Marty Mac Austin.

Memorials are being left to the First Congregational Church in Centralia and may be sent in care of the Hayes-Popkess Funeral Home, (mailing address – 814 Castle, Seneca, Kansas 66538)

To order memorial trees or send flowers to the family in memory of Louis Hayes, please visit our flower store.