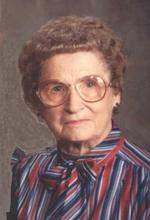 Lucrenia Smith Dannevik passed away peacefully on February 4, 2011, at Eastridge Care Home where she had resided since November, 1997.  Cynthia Emma Lucrenia was born on November 2, 1916 at Lillis, KS to Robert and Lota Tate Smith.  She was married on her birthday in 1936 to Roy (Danny) Dannevik who preceded her in death in 2008.  Lucrenia attended country schools in the Vermillion area and graduated from Vermillion High School in 1930.

After living briefly in Vermillion, California, Colorado, and Axtell, she and Danny lived in the Centralia area where they raised their two daughters.  Lucrenia worked for Nash’s Grocery Store in Vermillion, Slimaker dress factories in Onaga and Holton, Ensley Veterinary Clinic and Hayes-Popkess Funeral Home in Centralia.  She was a master quilter and also enjoyed making ceramics, playing bridge, and attending athletic events with Danny.  She was a member of the Centralia Booster Club, the United Methodist Church where she sang in the choir, was a member of the Lady Quilters, and tabulated the weekly offerings for many years.  She was also a member of the WSCS and received a lifetime membership pin.  Lucrenia was known for her love of her family and her infectious laughter which never left her despite her struggles with Alzheimer’s Disease.  The joy of her life was her grandchildren for whom she made delicious chocolate chip cookies.

To order memorial trees or send flowers to the family in memory of Lucrenia Dannevik, please visit our flower store.