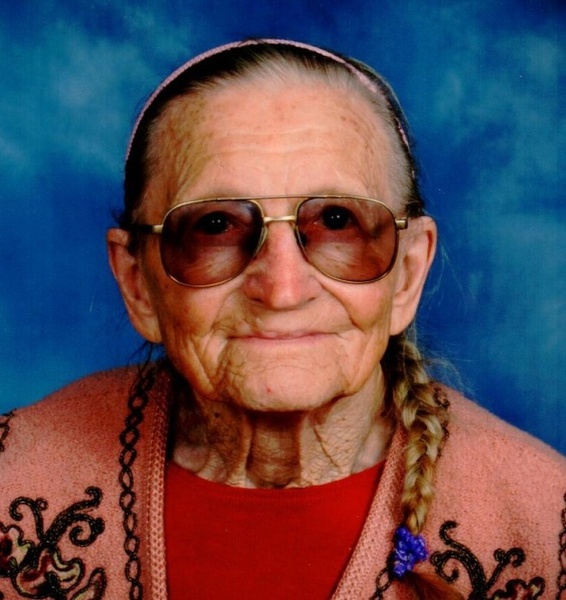 Luetta was born October 5, 1930 to Carl Jr. and Emilie (Rohlmeier) Kroemer at the family home place 6 ½ miles north of Seneca. She was the sixth of seven children. She went to school at Prairie Grove Schoolhouse until 8th grade. From there she worked and helped on the family farm.

Through a previous marriage, Luetta had two loving sons, Lester and Gerald. The family lived in Pawnee City, Nebraska for several years before moving to the family farm on Turkey Creek, North of Seneca, and later to town.

She was a woman of many talents. Employed at Crestview Manor of Seneca for over 40 years, she worked as a certified nurse aide providing caring services to the elderly of this community she loved.

Her strength in body and spirit was evident as she helped her son on the farm loading bales of hay, feeding cattle, driving and riding on the tractor, riding in the car or pick up while enjoying the scenery long into her later years.

Luetta was a devoted member of Friedens Church of rural Bern, Kansas her whole life. She was baptized in 1931 and confirmed in 1947. She regularly attended Sunday services as long as she was able.

She is preceded in death by her parents; a son, Gerald; siblings: Fredrick, Leonard, Lawrence, Luella, Lavern, and Lucille, as well as a brother-in-law and sister-in-laws.

She is survived by her loving and devoted son, Lester, and numerous family and friends who loved her dearly.

To order memorial trees or send flowers to the family in memory of Luetta Binder, please visit our flower store.