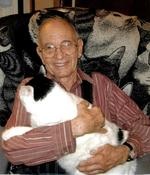 Marcus Harrison Bates, Jr., 86 formally of Granada, Kansas now of Seneca, Kansas died on Thursday, May 3, 2012 at Life Care Center in Seneca, Kansas.  Marcus was born on November 9, 1925 the son of Marcus H. Bates, Sr. and Rosa (Harring) Bates in Haxton, Colorado.   He entered the United States Army on June 20, 1944 and was discharged on June 7, 1946.  He served in Central Europe during his time in the service.  He was united in marriage to Sylvia Maxwell on April 4, 1952 in Bentonville, Arkansas.  They lived on the farm northeast of Granada until they bought their home in Granada which was formerly a rural school house.  They celebrated their golden wedding anniversary in April of 2002.  While living in Granada he attended the Church of the Brethren while it was active and always attended the services at Cobblestone Court in Sabetha.  Marcus was a member of the American Legion #282 in Wetmore where he served as past commander, the V.F.W. Post #7285 of Sabetha.  He served on the Granada Township Board and the Granada Cemetery Board.

He was preceded in death by his parents; his wife, Sylvia M. Bates on May 7, 2005; a son-in-law, Eldon Schneider.  He is survived by three daughters, Donita Spiker Schneider of Overland Park, Kansas, Patricia Bailey and her husband, Robert of Fredericksburg, Virginia and Barbara Winkler and her husband, Brian of Seneca, Kansas; one sister, Eleanor Koenig and her husband, Jubal of Hiawatha, Kansas and 10 grandchildren and 9 great grandchildren.

Memorial services will be Tuesday, May 8, 2012 at 10:00 a.m. at the Popkess Mortuary Chapel in Sabetha, with military honors conducted by the Wetmore American Legion #282.  A visitation will be Monday evening 6:00 to 8:00 p.m. at the Popkess Mortuary chapel in Sabetha.  Inurnment will be made in the Granada Cemetery at a later date and time.  Memorial contributions may be made to the Granada Cemetery sent in care of the funeral home, 823 Virginia Sabetha, Kansas  66534.

To order memorial trees or send flowers to the family in memory of Marcus Bates, Jr., please visit our flower store.