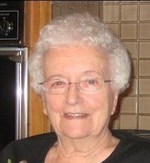 She married James Ivan Woolsoncroft on May 24, 1941 in Douglas, KS.  Margaret and Ivan farmed in Nemaha County and were in the grain storage business in Kansas and in Princeton, NE.  Ivan and Margaret built the first concrete grain storage elevator in Northeast Kansas in 1954.

She is preceded in death by her husband James Ivan Woolsoncroft Sr. who died March 16, 2000, and a son Wayne A. Woolsoncroft who died in infancy.

Funeral services will be Friday, December 7, 2012 at 10:30am at the First Congregational United Church of Christ in Centralia.  Rev. Bill Shea will conduct the services.  Julie Gleason will be the organist and Savannah Clark will play a piano solo and the congregation will sing “In the Garden”.  Burial will be in the Centralia Cemetery.  Casket bearers are Greg Woolsoncroft, Troy Woolsoncroft, Hunter Clark, Evan Woolsoncroft, Mike Barnes and Gary Becker.

Memorials are being left to the First Congregational United Church of Christ and sent in care of the Hayes-Popkess Funeral Home in Centralia, KS.

Online condolences may be left at www.popkessmortuaries.com.

To order memorial trees or send flowers to the family in memory of Margaret Woolsoncroft, please visit our flower store.