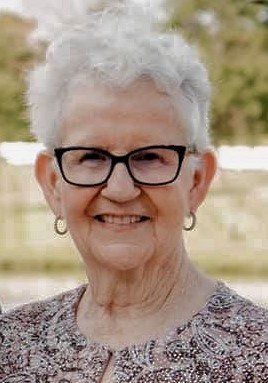 Marilyn Jean (McKibben) Harter, 84, passed away on April 11, 2022, after a lengthy battle with Crohn’s disease.  She was the youngest child born to Rex McKibben and Beulah Belle (Hacklema) McKibben on December 19, 1937, in Wichita, Kansas.   The family moved to an oil lease owned by Continental Oil Company southwest of Winfield, Kansas for whom her father worked. Later, the family moved into the town of Winfield.  Marilyn attended elementary, junior high, and graduated from Winfield High School in 1955.  Then, she attended Emporia State University majoring in foreign language, and graduated in 1959 with a Bachelor of Science in Education.  During her time at ESU, she was a member of the Alpha Sigma Alpha sorority and accompanied many vocal students on the piano.  Also, while at college, she met her husband, John E. Harter. They were married on May 29, 1960 and spent 51 wonderful years together, before John passed away in 2011. Marilyn and John were blessed with three children, Stanley Robert Harter, Stephanie Noelle Harter Wineinger, and Douglas Scott Harter.

Marilyn taught French, Spanish, and English for 18 years at various schools including Fort Scott High School and Juco, Northern Heights High School, Topeka West High School, and USD 488 at Bern and Axtell, Kansas.  During her teaching career, she was a sponsor of Kays and many classes.  She painted the murals for proms and the backdrops for school plays for many years.  Marilyn worked alongside John operating the Harter Feedlot and Farm. In addition, she raised Alaskan Malamutes, Siberian Huskies, English Springer Spaniels, and Cairn Terriers.

Marilyn was very active in the community, and was a leader for the Lucky Shamrock 4-H club, Geology leader, and fair judge for Geology.  She volunteered at the Food Pantry and was a member of the Bern United Methodist Church.  Also, she loved performing in the Bern Days musical programs each year, and loved to garden, paint, play piano, do puzzles of all kinds, and play cards.  She was one of the last founding members of the Queen of Diamonds Bridge Club in Bern, and may have been known at the Let it Ride tables at the Casinos!  In addition, Marilyn loved to travel, and she especially enjoyed the years that she and John went to Texas for the winter.  One of her most memorable trips included traveling to London and Ireland with her entire family.  She was passionate about genealogy, and in 2018, Marilyn and Stephanie took a trip to the eastern United States to do research on Marilyn’s ancestors.

Funeral Services will be held on Friday, April 15, 2022, at 2:00 p.m. at the Bern United Methodist Church.  Visitation will be held on Thursday, April 14, 2022, from 5:30 p.m. to 7:00 p.m. at the Popkess Mortuary in Sabetha, Kansas.  Memorial contributions may be made to the Bern Cemetery Improvements or to the Rocky Mountain Elk Foundation sent in care of Popkess Mortuary, 823 Virginia Street, Sabetha, Kansas  66534

To order memorial trees or send flowers to the family in memory of Marilyn Jean Harter, please visit our flower store.