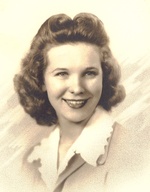 Marjorie Marie (Cyphers) Graham, 91, passed away September 9, 2010 at her home in Emporia, Kansas. She was born April 16, 1919 in Fairview, Kansas to the late Paul and Irene Cyphers. She was a graduate of Emporia State University in Emporia, Kansas with a degree in Library Science. She worked as a librarian at Emporia State University Library and then at Emporia Public Library Children’s Department. Marjorie was loved and adored by all her family and friends and will be truly missed.
Marjorie is survived by her children, Paul, Cherie and John Graham and Sibyl Failing; her ten grandchildren, and three great grandchildren; and sister, Mary Joyce Owen.
She was preceded in death by her husband, Garry and daughter Holly.

To order memorial trees or send flowers to the family in memory of Marjorie Graham, please visit our flower store.