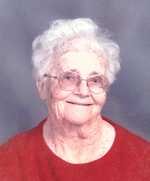 She was born November 11, 1913 southwest of Topeka, KS to Charles and Cecil Hanson.  She attended a country school at Elvation for 6 years before moving to Seabrook in Topeka to finish grade school.  She attended high school at Washburn Rural, graduating in 1933.

She was a live-in housekeeper in various homes for several years.  She was working at Capper’s Publications until she married Don Norton on February 18, 1947.  They moved to Centralia where she spent the rest of her life.  She helped her husband manage his construction business.  When Don became ill she cared for him in the home until his death on May 20, 1983.  Four years after his death Marjorie moved into the Leisure Lodge in Centralia.

Marjorie is a member of the United Methodist Church in Centralia, the Eastern Star, the Armstrong Moyer American Legion Auxiliary, the reading circle, VFW and the Stitch and Chatter Club all of Centralia.

She is survived by several nieces and nephews and many friends.

She was preceded in death by her husband, two sisters, Marie Hollenbeck and Edith Egbert and one brother Marshall Hanson.

Graveside services will be Tuesday, November 22, 2011 at 10:00 a.m. at the Centralia Cemetery.  A memorial service will be scheduled later and will be held at the Eastridge Care Home in Centralia.  Rev. Michael McKee will conduct the services.

Memorials may being left to the United Methodist Church of Centralia and may be sent in care of the Hayes-Popkess Funeral Home, Centralia (Mailing address, 814 Castle, Seneca, KS 66538).

To order memorial trees or send flowers to the family in memory of Marjorie Norton, please visit our flower store.