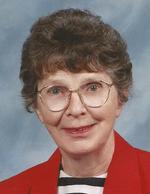 M arjorie McFall went to meet her Savior on February 19, 2013 after a brief stay in the Sabetha Hospital.

Marjorie Helen Priest was born on November 30, 1926, to Ralph and Helen White Priest in Sabetha, KS.   She lived in the community of Albany with her parents and older brother, Kenneth.   After graduating from Sabetha High School in 1944, she attended the Kansas City Secretarial School in Kansas City, MO.

Marjorie married Leonard Dale Strahm on September 7, 1945.  She was a loving wife and help-mate, homemaker and mother of  three children.  Marjorie accepted Jesus Christ as her Savior at a young age and joined the First Congregational Church of Sabetha.  She taught Sunday School for over 30 years, and at various times served on the Deaconess Board and was a co-chairman of a Division of the Women’s Fellowship.  In 2012 she transferred church membership to the First United Methodist Church of Sabetha.   She was also a Coordinator for the Friendship Bible Coffees as part of the Christian Women’s Club.  She was an active member of the Auxiliary of The Gideons International and the Nemaha County Farm Bureau.

Following Leonard’s death in 1978, Marjorie became a caregiver for her parents.   Her mother lived in the Fountain Villa Rest Home and her father lived in Marjorie’s home until he moved into the Apostolic Christian Home.   She was preceded in death by her parents, Ralph and Helen White Priest and her brother, Kenneth Priest.

Family visitation will be on Saturday, February 23, 2013 at the Sabetha First United Methodist Church from 1:00 to 2:30 p.m. Funeral services will be held following visitation at the church at 2:30 p.m.

In lieu of perishable flowers, honor Marjorie’s life by sending a memorial gift to the Sabetha First United Methodist Church Building Fund, the Sabetha Community Hospital, or the The Gideons International in care of Popkess Mortuary, 823 Virginia, Sabetha, KS   66534.

To order memorial trees or send flowers to the family in memory of Marjorie Strahm McFall, please visit our flower store.