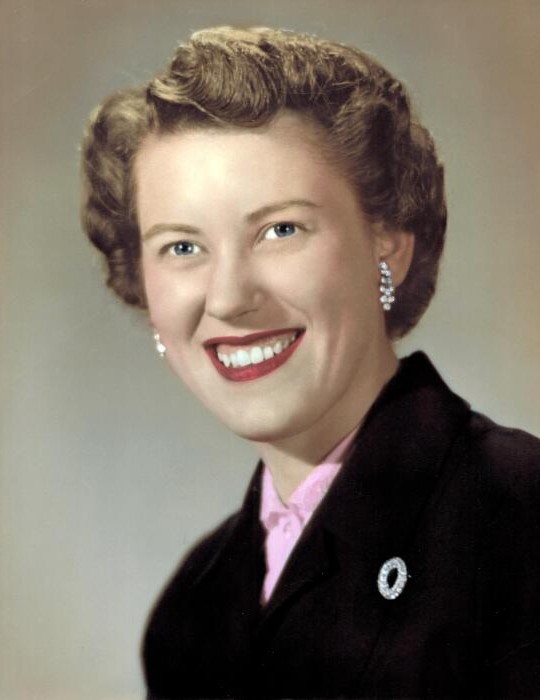 She was born on December 8, 1926 the daughter of Andrew and Minnie (Brockes) Mincher at Berwick Center north of Sabetha.  Beaulah grew up around Berwick and Sabetha, attending grade school at Berwick, Sabetha High School and Caster Beauty School in St. Joe, Missouri.  She was united in marriage to Raymond Halstead on June 6, 1959 and they had 13 very short but very happy years together in Decatur, Nebraska.

She was a devoted member of the RLDS Church, was church pianist and organist since she was about 12 years old.  Was District Women’s leader for 10 years in Decatur, and councilor to the stake women’s leader in St. Joe, Missouri, two years, also very active in her home branch of the church.  She also shared her talent by singing and playing in many other churches in and around Sabetha, Nebraska and Missouri.

She was a member of the Burt County Choir in Decatur, Nebraska that sang many places including the White House, Lincoln Memorial and on the capitol steps in Washington, D.C. in 1976.  She was a lover of music and loved to play and sing the beautiful hymns that especially told the beautiful message of Jesus.

She was a professional cosmetologist for 50 years.  After moving back to Sabetha in 1984 to take care of her mother, she attended the Congregational Church in Sabetha and was active in choir, and also played the organ and piano.  She also attended the Christian Women’s Club, Albany Sunflower Unit, the Hospital Guild, B.P.W. and order of the Eastern Star which she was Worthy Matron one year in Nebraska and two years in Sabetha.  She also was Grand Representative of Al. in Kansas, of grand Chapter in Kansas for two years, also District Aide in 1991.

She was preceded in death by her parents; her husband, Raymond Halstead; one sister, Norma Watkins.

Beaulah did volunteer work at the Sabetha Manor and Fountain Villa Nursing Home.  She enjoyed her home and was so happy when friends visited her.  She enjoyed cooking, keeping house, crocheting, music and Jesus.

Beaulah’s wishes were not to have services. Inurnment will be made in the Hillcrest Cemetery in Decatur, Nebraska.  Memorial contributions may be made to NorthRidge Church, sent in care of Popkess Mortuary, 823 Virginia Street, Sabetha, Kansas 66534.

To order memorial trees or send flowers to the family in memory of Martha Beaulah Halstead, please visit our flower store.

No services to be held