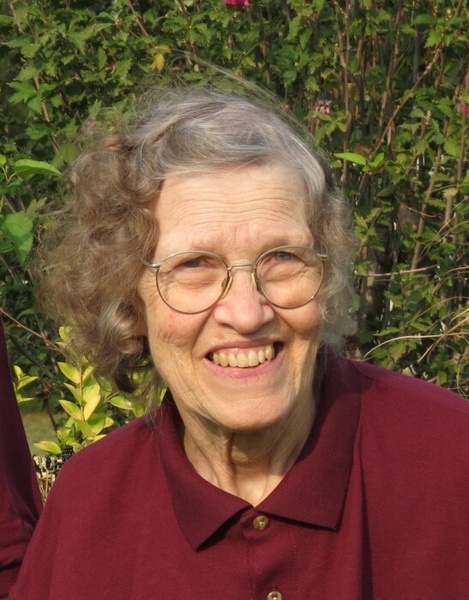 If someone were to describe Martha Lois (Stowell) Visser, it would sound a lot like the Love chapter in the Bible – 1 Corinthians 13: 4-8. Patient, kind, doesn't envy or boast and isn't proud; not rude or self-seeking, not easily angered and keeps no record of wrongs. Doesn't delight in evil but rejoices with the truth. Always protects. Always trusts. Always hopes. Always perseveres. Never fails to love.

M artha Lois (Stowell) Visser, 86, passed away at Country Place Assisted Living in Seneca, Kansas on Wednesday, October 20, 2021. Lois was born on December 20, 1934, to Percy and Cecile (Williams) Stowell on their family farm southeast of Olsburg, Kansas.  She and her older brother, Lee, attended Oak Grove School a couple miles from their home before attending high school at Olsburg High School. Lois went on to earn her bachelors and masters degrees in home economics from Kansas State University. Lois was a talented seamstress and enjoyed sewing for herself and her family.  She made the classic satin dress that she wore when she walked down the aisle of the Olsburg United Methodist Church to marry Eugene Sylvester Visser on October 7, 1962. Lois and Eugene recently celebrated 59 years of marriage. They began their married life on Eugene's family farm south of Riley. In 1966, during the Fort Riley expansion, they relocated their farming and cattle operation to Goff, Kansas in Nemaha County, where they worked and resided for more than 55 years.

Lois was a life-long learner, sharing that love of learning first in the classroom and then with their three children, seven grandchildren and 5 great-grandchildren. After receiving her bachelor’s degree, she taught home economics at Clyde High School in Clyde, Kansas, then went back to complete her master’s degree before joining the staff at the University of Nebraska in Lincoln. After marrying Eugene, Lois dedicated her life to perfecting the art of being a farm wife, homemaker, gardener and mother. She was active in a local neighborhood club, Family and Community Education (FCE) Extension Club, and project leader for the Red Vermillion 4-H Club. Lois was an avid gardener, famous among her grandchildren for her strawberries and sweet corn.

Lois lived her Christian faith daily. She was a dedicated member of the Corning Trinity United Methodist Church, participating in UMW (United Methodist Women), and helping with Vacation Bible School, Sunday School, and in later years, playing the piano and organ. She was a quiet, kind and gentle soul, always willing and looking for ways to help and care for others. She took great joy in caring for her grandchildren, and she and Eugene were faithful attendees of activities and events for all their children, grandchildren and great-grandchildren.

Lois is survived by her loving husband, Eugene of the home; and her three children, Carol (Judd) Meyer of Sabetha, Kansas and their children Darla (John) Dwyer of Scottsbluff, NE; Amanda (Wil) Edelman and Wiliam, Adalynn, Gracie and Harv of Sabetha; and Zachary Meyer of Sabetha; Sharon Lindell of Riley and her children Haley (Robert) Dulniawka of Manhattan; Kyla (Dillon) Tittel and Camryn of Riley; Tyler Lindell of Sabetha; and Ryan Lindell of Riley; and Gregory Visser of Goff (partner Samantha Wichman and her daughters Lilly and Maggie); brothers-and sisters-in-law Beverly Stowell of Beloit, Irene Visser of Cedar Rapids, IA, Virgil and Marion Visser of Wakefield, and Albion and Jualdene Visser of Sydney, NE.

Lois was preceded in death by her parents, her brother Lee Stowell; her father-and mother-in-law Ed and Martha Visser, and brothers- and sisters-in-law George and Lorene Visser, Leroy and Evelyn Visser, Harold Visser, Evelyn and Xen Smith, and Ken and Rosemary Visser.

Funeral services will be Monday, October 25, 2021 at 10:30 a.m. at the Corning Trinity United Methodist Church in Corning, Kansas.  Visitation will be Sunday, October 24, 2021 from 2:00 p.m. to 4:00 p.m. at the Popkess Memorial Chapel in Seneca, Kansas.  Interment will be in Corning Cemetery.  Memorial contributions can be made to a fund yet to be designated by the family and sent in care of the Popkess Memorial Chapel, 814 Castle, Seneca, Kansas   66538.

To order memorial trees or send flowers to the family in memory of Martha "Lois" Visser, please visit our flower store.