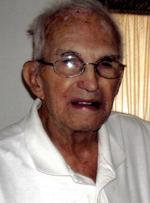 Marvin E. Brunner, 91, of Sabetha, Kansas died Saturday, November 26, 2011 at the Apostolic Christian Home.
Marvin was born on December 19, 1919, the son of Edward and Malinda (Brammer) Brunner.
Marvin attended school in Sabetha, soon after he became an active member in the U.S. Army. He served four years and was honorably discharged on October 10, 1945.
Marvin married Ella Mae Sinnett on May 24, 1945 in Hiawatha, Kansas. From this union three children were born, Jean, Anita and Eddie.
Marvin farmed in the Sabetha area then worked as a heavy equipment operator in the Nemaha County area. Later Marvin was employed by Associated Transport hauling Ford cars and trucks. After Associated Marvin proceeded to work for Masonite Corporation in Kansas City, Missouri. Then with Masonite he was transferred to Denver, Colorado after that to Los Angeles, California where he retired after 23 years of service. In 1997 Marvin and Ella Mae moved to Excelsior Springs, Missouri and a few years later to Sabetha as their final destination.
Marvin was preceded in death by his parents; two sisters, Norma and Leotta. He is survived by his wife, Ella Mae of Sabetha; two daughters, Jean Lee and her husband, Doug of Kansas City, Missouri and Anita Inglis and her husband, Bob of Sabetha; one son, Eddie Brunner and his wife, Joyce of Anaheim, California; one sister, Naomi Aeschliman of Deer Creek, Illinois and 7 grandchildren, 10 great grandchildren and 1 great-great grandchild.

Funeral service will be Wednesday, November 30, 2011 at 10:30 a.m. at the Popkess Mortuary Chapel in Sabetha. A family visitation will be Tuesday evening 5:00 to 7:00 p.m. at the funeral home. The interment will be made in the Sabetha Cemetery with military honors conducted by the V.F.W. Post #7285 of Sabetha. Memorial contribution may be made to the Apostolic Christian Home.

To order memorial trees or send flowers to the family in memory of Marvin Brunner, please visit our flower store.