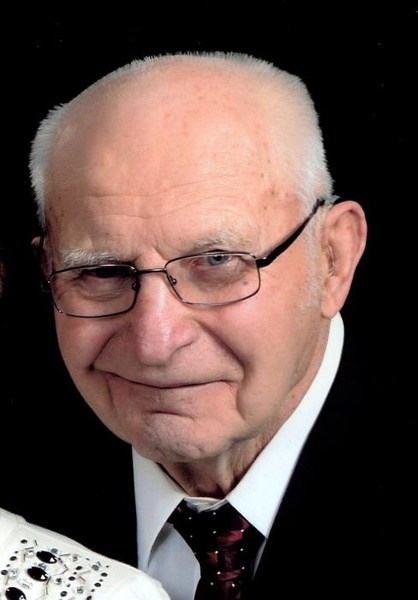 M arvin Joseph Winkler, 84, of Seneca, Kansas died peacefully at his home on Earth Day, April 22, 2020, surrounded by his family.

Marvin was born on September 24, 1935, the son of Eugene F. and Philomena A. (Kongs) Winkler in Goff, Kansas. He was one of five children born to this union.  He grew up in the Kelly area and graduated from Kelly High School in 1953.

Marvin was united in marriage to Theresa Marie Hermesch on February 12, 1957.  They celebrated 63 wonderful years of marriage together. Marvin entered into farming as a young man in the Corning community.  Marvin and Theresa received several soil conservation honors and received the Kansas Outstanding Young Farmer Award in 1971.  He also served on an agricultural advisory council for Congressman Jim Slattery.  They sold their farmstead near Corning and moved to Seneca in 2004.  Marvin continued farming until 2017 when Parkinson’s no longer permitted his active participation.  However, his heart remained in farming with questions about planting, harvest, and baby calves within days of his death.

Marvin served on numerous boards.  He served on the Nemaha County Cooperative board when the Seneca elevator was being built and was a member of the Rural Water District #3 Board for ten years.  Marvin was active in the Corning community, coached youth baseball, served on the Corning Volunteer Fire Department and was very involved with the Corning Centennial celebration.  He was a member of St. Patrick’s Catholic Church in Corning for 47 years where he served on the parish council and taught CCD to high school youth for many years.  Marvin was a lifetime member of the Knights of Columbus Council 1769.  Marvin and Theresa provided marriage preparation classes to many young couples in the community.  Later, Marvin and Theresa became parishioners of Sts. Peter and Paul Catholic Church in Seneca where he was a member of the St. Joseph Society.  Marvin served as an agricultural enumerator for the US Census.  Marvin enjoyed playing cards, square dancing, hunting, traveling and, most importantly, his children, grandchildren and great-grandchildren.  Marvin was known for his beautiful blue eyes, quick wit and infectious laugh.  Marvin never knew the meaning of ‘stranger’ and made friends of all he encountered.

Marvin was preceded in death by his parents; his two brothers, Linus Eugene Winkler and Albert Leo Winkler, and his sister, Eleanor Agnes Hermesch.

Viewing will be open to the public on Friday, April 24, 2020 from 9:00 a.m. to 4:00 p.m. at the Popkess Memorial Chapel in Seneca. No family members will be present due to COVID-19.  A private family funeral will be held.  Marvin will be carried to his place of rest by his grandsons on his John Deere trailer, the first new piece of equipment he and Theresa purchased in 1958.  A Celebration of Life Mass will be held at a later date.  In lieu of flowers, family is requesting memorial contributions be made to Sts. Peter and Paul Catholic Church, sent in care of Popkess Memorial Chapel, 814 Castle, Seneca, KS 66538.

To order memorial trees or send flowers to the family in memory of Marvin Winkler, please visit our flower store.