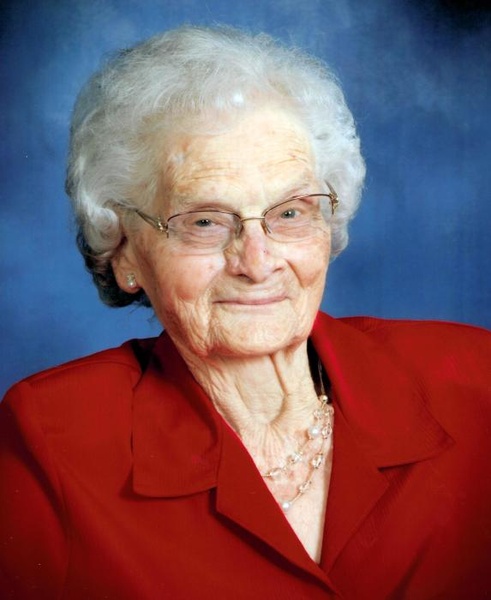 She was born at Sabetha, Kansas on January 19, 1924 the daughter of Henry William Hartman and Gertrude Mable (Gakle) Hartman.  She was their second daughter.  She grew up in the Sabetha area, attended Spring Grove and Pleasant Valley Grade School.  She graduated in 1938 from Pleasant Valley and 1942 from Fairview High School.  After completing her schooling she worked at the Brown County Courthouse for A.C. Hansan.  She then went to Topeka and worked for Preferred Insurance Company; in September of 1945 she went to Ontario, California where she was employed at General Electric for five years.  She returned to Kansas in 1948.  As a young girl she helped a lot of farm ladies with house work and other activities.

Mary loved gardening, planting flowers and making quilts which each grandchild got when they were a baby and received more later on.  She was baptized on April 5, 1925 at St. Paul’s Lutheran Church in Fairview.  She attended all her life and was a member of the Dorcas Society and taught Sunday school for many years.  She was united in marriage to Harold W. Bauerle on July 17, 1949 at St. Paul’s Lutheran Church.  Four children were born to them, Glenna Jean Strahm and her husband, Roderick of Sabetha, Joyce E. Corwin and her husband, Terry of McPherson, Kansas and twin sons, Larry Bauerle and his wife, Jane of Sabetha and Gary Bauerle and his wife, Marcia of Sabetha.  She was preceded in death by her parents; her husband, Harold Bauerle on May 21, 2011; a sister, Ruth Manche and an infant brother.  Other survivors are sisters, Edith Mize of Fort Worth, Texas, Betty Allen of Sabetha and 11 grandchildren 16 great grandchildren with two on the way.

Funeral services will be Thursday, October 12, 2017 at 10:30 a.m. at the St. Paul’s Lutheran Church in Fairview.  A visitation will be from 9:30 a.m. to service time at the Church.  The interment will be made in the Sabetha Cemetery.  Memorial contributions may be made to the St. Paul’s Lutheran Church and the Sabetha Manor sent in care of the Popkess Mortuary 823 Virginia Sabetha, Kansas  66534.

To order memorial trees or send flowers to the family in memory of Mary Bauerle, please visit our flower store.