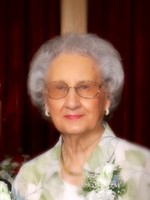 Louise grew up in Owensboro, KY and graduated from Owensboro High School in 1941.  She met her future husband Ray while she was working at Camp Breckinridge Army base in Morganfield, KY while he was stationed there for a time during World War II.  Ray returned from the war in Europe and they settled in Owensboro, but then moved to Seneca in 1954 to operate Cooksey Auto Parts. They lived above the store until its collapse on Halloween morning 1957.  In 1969 they purchased the store and renamed it Ray's Auto Supply.  They loved being on Main Street.  Louise also worked for the Southwestern Bell Telephone Office in Seneca for 22 years, retiring in 1980.  She enjoyed working for the telephone company, and took pride in knowing most of the customers by their first names.  She enjoyed playing bridge, golf and the piano, she was active in her church, and she cherished her many friends throughout the community.  She felt time spent with her family, especially the grand and great-grandchildren, to be especially rewarding.

The funeral service will be held at Popkess Memorial Chapel, Seneca, on Friday July 20, 2012 at 11:00 am, with visitation starting at 9:00 am.  Burial will be at the Seneca Cemetery.   Expressions of sympathy can be made to the Shriners Childrens Hospital, Grace Hospice of Topeka, or a charity of your choice.

To order memorial trees or send flowers to the family in memory of Mary Downing, please visit our flower store.