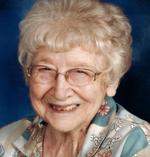 M ary Jane Koch, 83, formally of Fairview died Wednesday, October 3, 2012 at the Sabetha Community Hospital.  She was the daughter of Henry Sextro and Catherine (Heinen) Sextro was born at Baileyville, Kansas on September 19, 1929 and grew up in that community and attended school there.  She was a member of the graduating class of 1947 as class salutatorian.

She was united in marriage to Wilbert (Bert) Eugene Koch on April 21, 1951 in Beattie, Kansas.  They lived in Beattie for a short while and moved to a farm south of Fairview where they raised their five daughters and one son; Carol, Gary, Mary, Connie, Lois and Janet.

She was a member of the St. Augustine’s Catholic Church at Fidelity, Kansas.

She worked at the Hiawatha Community Hospital for a number of years and was a devoted farm wife.  Her passion was her family and grandchildren.  She loved to do needle work, crossword puzzles, playing cards and games.

She was preceded in death by her parents; her husband, Bert Koch; a daughter, Carol Phillips; a sister, Helen Sextro; a brother, Kenneth Sextro.

To order memorial trees or send flowers to the family in memory of Mary Koch, please visit our flower store.