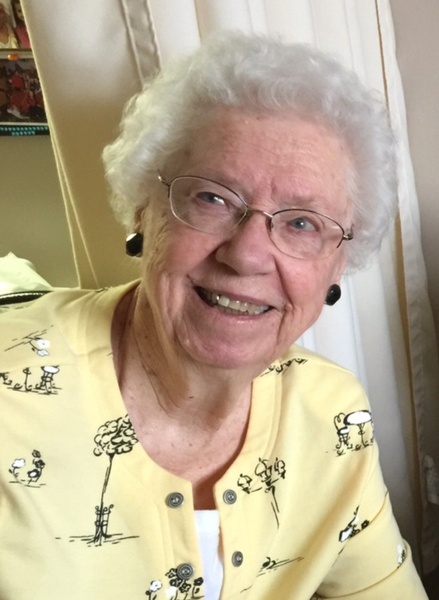 Mary was born on May 12, 1925 to Carl and Minnie (Kroemer) Meyer in Preston, Nebraska. She graduated from Sabetha High School in 1944.

Mary married Ivan Montgomery on August 8, 1948. They celebrated their golden anniversary in 1998. The couple lived south of Oneida on a farm for two years and then moved south of Bern and farmed for 48 years. They retired and moved to Sabetha in February of 2000.

Mary was a nurse at Dr. Nichols Sanitarium in Savannah, Missouri, working with cancer patients before she and Ivan were married. Once married, Mary helped on the farm, raised registered dogs and later worked at the Bern Meat Locker.

A Celebration of Life Service will be held at 1:30 p.m. on Sunday, July 12, 2020 at the Popkess Mortuary Chapel in Sabetha, KS. Visitation will be from 12:30 to 1:30 p.m. prior to service time at the funeral home. Inurnment will be made in the Albany Cemetery. Memorial contributions may be made to the Nemaha County Home Health & Hospice, sent in care of Popkess Mortuary, 823 Virginia Street, Sabetha, KS 66534.

To order memorial trees or send flowers to the family in memory of Mary Montgomery, please visit our flower store.