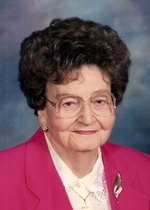 She was born February 12, 1914 in Sabetha, Kansas, and lived in the Anderson area for many years.
She worked at Sears for 14 years as a Sales Division Manager.
Mary was a member of Mounds Baptist Church in Anderson since 1945 participating in the Loyal Builder's Sunday School class. She volunteered at St. John's Health System and also was a lifetime member of the Victoria Guild where she volunteered over 6000 hours. She also volunteered at United Faith Housing (Harter House).
She is survived by her two daughters, Catherine M. and husband Bruce Sutton of Middletown and Pamela A. and husband Howard Bledsoe of Tucson, Arizona; four grandchildren, Linnae Sutton of Middletown, Ryan and wife Melanie Sutton of Shirley, Chad and wife Sherry Bledsoe of Virginia and Jason and wife Lisa Bledsoe of Georgia; six great grandchildren, Dustin (18), Lindsay (17), Whitney (9), Tiffany (7) Bledsoe and Aaron (5), and Alison (2) Sutton; a host of nieces, nephews, and cousins. Also surviving are several close friends, Jay and Della Brown, Dave Wells, Nick and Betty Gray, Nayleen Poole, Homer and Noreen Shelton, Bob Kleyla and so many more.
She was preceded in death her parents, Margaret and Francis Althouse; by her daughter, Jessie J. Humphrey who passed away in 1950; her first husband, Orville V. Humphrey in 1955; second husband of 32 years, Gilbert F. Warfield in 1991; two brothers, Fred Althouse and Floyd Althouse and one sister, Marjorie Forrester.
There will be a visitation from 1:00 to 2:00 PM on Tuesday, March 8, 2011 at Popkess Mortuary in Sabetha. A graveside service will follow the visitation at 2:00 PM at the Sabetha Cemetery.
Memorial contributions may be made to the American Heart Association, The Christian Center of Anderson and Mounds Baptist Church of Anderson.

Those who knew Mary found her to be caring and compassionate every day. She always had good things to say and was a shoulder to lean on for many who needed it. She was always able to see the brighter side of things even in the darkest of times.

To order memorial trees or send flowers to the family in memory of Mary Warfield, please visit our flower store.