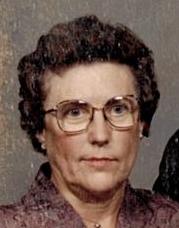 Mary Jo was born April 22, 1933 in Axtell, Kansas, the daughter of John and Julia (Hickey) Stuke.  She was raised on a farm southwest of Baileyville, Kansas and attended Sacred Heart Catholic Grade School.  Mary Jo graduated as valedictorian with the Baileyville High School class of 1951.  She moved with her family to Seneca, Kansas in March of 1952.

Mary Jo was united in marriage to Leonard Gress on April 19, 1952 at Sts. Peter and Paul Catholic Church in Seneca.  They were the parents of two children, Judith “Judy” Gress and Michael Gress.  Leonard passed away June 13, 1957 and Judy passed away April 8, 1991.

She married Marvin White on October 14, 1963 at Sts. Peter and Paul Catholic Church and moved to the Summerfield community until 1993 when they moved to Seneca.  Mary Jo was an accomplished seamstress and taught sewing to 4-H girls at Summerfield.  She also liked cooking, baking, and working with flowers.

Mass of Christian Burial is Saturday, January 25, 2014 at 11:00 a.m. at the Sts. Peter and Paul Catholic Church in Seneca.  Recitation of the rosary is Friday at 2:00 p.m. and 7:00 p.m. at the Popkess Memorial Chapel in Seneca.  Interment will be in the Sacred Heart Catholic Cemetery in Baileyville.

To order memorial trees or send flowers to the family in memory of Mary White, please visit our flower store.