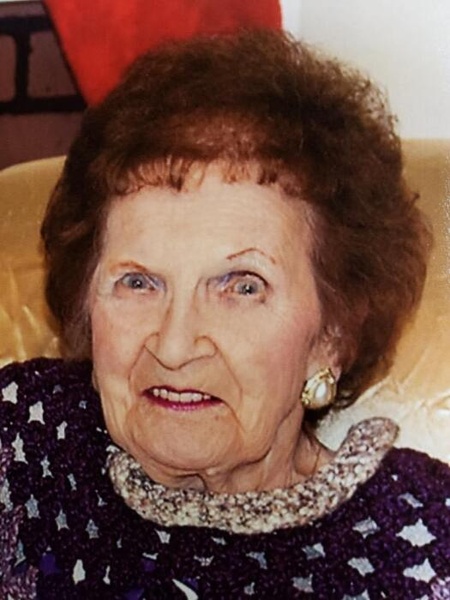 She was born on December 17, 1933, in Axtell, Kansas the daughter of Oscar and Anna (Volz) Hughes.  She grew up in northeast Kansas and attended Oneida High School.  She was the only graduate in the class of 1952.

Following graduation, she moved to Marysville, Kansas and worked in the local drugstore.  She later moved to Sabetha, Kansas where she was employed at Duckwalls, Williams Cleaners, and Nabb’s Café.

She married Weldon Kendall on October 9, 1954.   They had one daughter, Kay Jean, “Shorty.”  They later divorced.

Annie moved to Salem, Nebraska in 1978 and began working at the Salem Café. Many knew Annie for her ability to cook an amazing hamburger and they looked forward to her daily café specials.

She married Charles “Chuck” Baker on July 3, 1989.  Annie and Chuck purchased the Salem Café that same year.  They worked alongside each other, dedicated their time serving the community, and made many life-long friends.  She loved coordinating the yearly Easter egg hunt for the children in Salem and hosting the Fourth of July celebration for friends and family.  She worked at the café until 2006 when she was forced to retire due to her health.  Annie and Chuck’s marriage was blessed in the Catholic Church on October 7, 2006, at St. Mary’s Catholic Church in Dawson, Nebraska.  Annie returned to Sabetha in 2007.  She moved to Cobblestone Court in 2010 and then, to the Sabetha Manor in December, 2011.

Annie was known for the love of her family, her faith, her cooking, and her love of the Kansas State Wildcats.

Annie was preceded in death by her parents; her husband, Charles, on February 26, 2011; her two sisters, Cathy Utecht and Rita Wende; and her brother, Don Hughes, Sr.

She is survived by her daughter, Kay (Larry) Wissmann, of Falls City, Nebraska; her granddaughter, Melissa Graf, of Franklin, Indiana; her sister, Helen Schwindamann, of Marysville, Kansas; her brother, Pat Hughes, of Lee’s Summit, Missouri; and her nieces, nephews, several cousins, and many friends.

A parish Rosary will be prayed on Friday, March 5, 2021, at 1:00 p.m. at Sacred Heart Catholic Church in Sabetha, Kansas followed by a visitation until Mass time.  Mass of Christian Burial will be at 2:00 p.m.  The inurnment will be in the Morrill Cemetery.  Memorials may be made to Nemaha County Home Health and Hospice sent in care of Popkess Mortuary, 823 Virginia Street, Sabetha, Kansas 66534.

To order memorial trees or send flowers to the family in memory of Mary Ann "Annie" Baker, please visit our flower store.