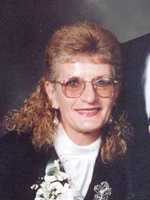 Mrs. Lykins is being cremated and the family will have services at a later date.

Memorials are being left to the Mary-Jane Lykins Memorial Fund and may be sent in care of the Hayes-Popkess Funeral Home (Mailing Address - 814 Castle, Seneca, KS 66538).

The Hayes-Popkess Funeral Home in Centralia, KS is in charge of arrangements.

To order memorial trees or send flowers to the family in memory of Mary Jane Lykins, please visit our flower store.