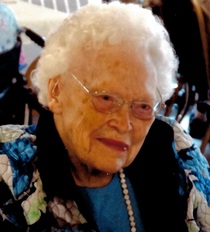 Maude was born on July 14, 1913 near Corning, Kansas, the daughter of Ray and Blanche (Bliesner) Jerome. She attended the Lone Pine, District #114, rural school, the Centralia schools and her senior year at Corning High School. She graduated from Corning High in May 1931. After receiving her teacher’s certificate from the University of Kansas, she taught for two years at the Lone Pine School.

On June 9, 1935, she married Earl A. Hightower at Centralia, Kansas. They were married for 72 years before his passing in September 2007. They resided in Centralia from 1935 to 1940; then lived in Bern from 1941 until 2007, with the exception of 2 ½ years while Earl served in the U.S. Navy during WWII. She was the first President of the Bern Music Mother’s and served as community and project leader for the Lucky Shamrocks 4-H Club. She was an excellent homemaker, skilled in cooking, sewing, knitting, and crocheting. She taught beginning piano, cake decorating, and loved the beauty of her flowers. She was especially adept at water color and china painting.

Memorial Service will be held on Saturday, October 10, 2015 at 2:00 p.m., at the Bern United Methodist Church in Bern, Kansas. Visitation will be from 1:00 p.m. until service time.  A private family inurnment service will be held at the Bern Cemetery prior to the Memorial Service.  Memorial contributions may be made to K-State Hightower Engineering Scholarship or the Bern Community Foundation, sent in care of the funeral home, 823 Virginia, Sabetha, KS 66534.

To order memorial trees or send flowers to the family in memory of Maude Hightower, please visit our flower store.