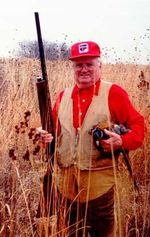 Max was born April 3, 1920 in Atchison, KS the son of Henry Raymond Colwell and Pearl Elizabeth Robeson Colwell. He graduated from Centralia High School and went on to attend Kansas State University where he received a Bachelor of Science degree in Mechanical Engineering in May 1942. He owned and operated Colwell Motor Company until the 1980's when he retired. Following retirement he continued to work for Durland Auto Parts in Seneca, KS.

Max married Mary Elizabeth Ward August 23, 1941. The couple lived in Centralia. She survives at the home in Centralia.

After completing ROTC at Kansas State he was commissioned as a Second Lieutenant and called to active duty in the U.S. Army May 26, 1942 and served as an Ordnance Officer. He served in the South Pacific during W.W. II. He was awarded the Asiatic Pacific Service Medal, World War II Victory Medal, American Theater Service Medal and Philippine Liberation Medal. He was honorably discharged at the rank of Major February 19, 1946.

He was a member of the First Congregational United Church of Christ, Centralia where he held many leadership positions. He was also a member and past commander of the Armstrong Moyer American Legion Post 216, Centralia and a lifetime member of the Seneca VFW Post 7458, and the Fraternal Order of the Masonic Lodge #39 at Seneca. He had been a member of the Centralia Rural School Board. Max was also an avid hunter and fisherman and loved the outdoors.

Memorial services will be 11:00 a.m. Friday, January 2, 2009 at the First Congregational United Church of Christ, Centralia. Rev. Deanna Lewis will conduct the service. A visitation will be from 10:00 a.m. Friday until service time. Organist, Julie Gleason and soloist, Pam Bachman will perform "How Great Thou Art" and "Amazing Grace". Honorary casket bearers are Sheri Burdiek, Alan Mars, Stacy Rempe, Jay Mars, Eric Figge, Brandon Figge, Megan England, Frank Skoch, Sarah Mahaffey, and Joseph Brown. Memorial contributions may be left to the First Congregational Church or the Centralia E.M.T.s and may be sent in care of the Hayes-Popkess Funeral Home. Inurnment will be in the Centralia Cemetery. Hayes-Popkess Funeral Home is in charge of arrangements.

To order memorial trees or send flowers to the family in memory of Max Colwell, please visit our flower store.