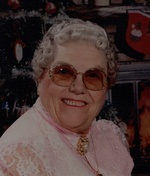 Maxine Elverna Smith Stoldt Hopp passed away peacefully surrounded by her loving family on October 22, 2010 at the Sabetha Community Hospital at the age of 91.
Maxine was born on April 12, 1919 in Beatrice, Nebraska to Ben Albert Smith and Emma Francis (Rorabaugh) Smith, one of eight children. The family moved to Sabetha in August of 1922. On November 27, 1940, she married Ival Heinniger Stoldt at Seneca, Kansas and they made their home on a farm west of Sabetha. To this union twin daughters, Janice Rae and Jeanette Gay were born. After Ival passed away on July 4, 1973, she moved into Sabetha where she was residing until the time of her death. On April 12, 1978 she married Wayne Hopp of Sabetha. He passed away in 1987.
Maxine was a loving hardworking wife, mother, grandmother and great- grandmother. She was loved by all who knew her for her great sense of humor and caring ways. She enjoyed traveling, being with her children, grandchildren and great grandchildren and playing cards with her friends at the Apostolic South Village.
Maxine was preceded in death by her husbands, Ival Stoldt and Wayne Hopp; her parents; three brothers, Kedrick Smith, Wesley Smith and Donald Smith; two sisters, Dorothy Smith, who died in infancy and Frances Dabler-Smith; a son-in-law, Arthur R. Bitner, Jr.. She is survived by her daughters, Janice Elliott and her husband, Roy of Hiawatha, Kansas and Jeanette Bitner of Iowa Park, Texas; two sisters, Opal Buchholz and Rosalie Painter both of Sabetha; three grandchildren, Janet Kincaid and her husband, Matthew of Olathe, Kansas, Dale Elliott and his wife, Angel of Hiawatha and Gary Elliott and his fiancée, Heather Payne of Sabetha and 6 great grandchildren two great-great grandchildren and nieces, nephews, great nieces and great nephews and a host of friends.

To order memorial trees or send flowers to the family in memory of Maxine Hopp, please visit our flower store.