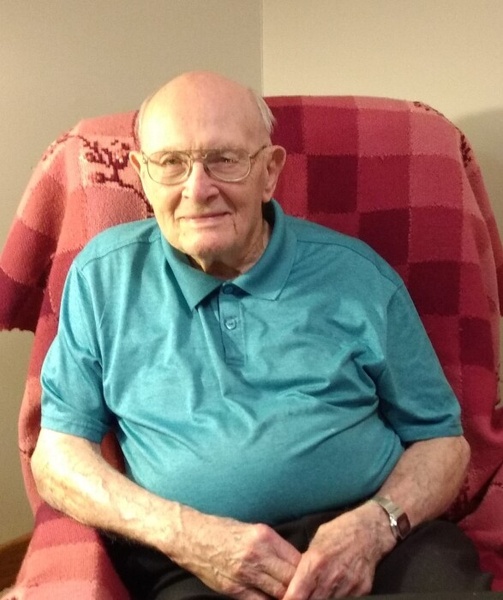 He was born on April 3, 1920 on his grandfather’s farm which was one mile east of Sycamore in Brown County. Melvin was the oldest of three children born to Charles Franklin Harold and Clara Mae (Engle) Harold.

Melvin met Irene Moore and they were married on February 1, 1942. One month later, on March 1, Melvin was called into military service. He was a Sergeant in the U.S. Army Amphibious Infantry, 7th Division. He was assigned to the Pacific Theater in World War II.  He was wounded in Okinawa, Japan twice, awarded two purple hearts, and honorably discharged on September 6, 1945.

After serving, he worked at Mid-America Dairy for 40 years and then retired in 1985. His retirement years were spent being involved in his church, traveling, gardening, and woodworking in his shop.  He read his Bible daily.

He was married to his sweetheart, Irene, for 71 years.  She preceded him in death on November 2, 2013.  Survivors include his brother, Gerald Harold; his sister, Betty (Farrell) McCallister; two nieces, Bonnie (Les) Shenefelt; Janice (Fred) Bent; two nephews, Alan (Sharon) McCallister and Mark (Shelley) Harold; and numerous great-nieces and nephews, and great-great-nieces and nephews.

Melvin was a loving and gentle man.  He was loved and will be missed by many.

A memorial service will be held on Friday, October 29, 2021 at 11:00 a.m. at the First United Methodist Church in Sabetha, Kansas. Prior to the service, a visitation will be held starting at 9:30 a.m. until service time at the church.  Memorial contributions may be made to the First United Methodist Church or the Sabetha Community Hospital sent in care of Popkess Mortuary, 823 Virginia, Sabetha, Kansas  66534.

To order memorial trees or send flowers to the family in memory of Melvin Harold, please visit our flower store.