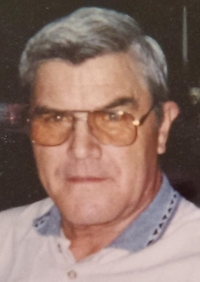 M elvin L. Werner, 73 of Fidelity-Sabetha area died Wednesday, July 3, 2013 at Stormont Vail Hospital in Topeka surrounded by his family and friends; transitioning peacefully to his heavenly home.  He was born on October 27, 1939 the son of Ferdinand and Helen (Vohs) Werner in Sabetha, Kansas.  He graduated from Fairview High School in 1957.  He also attended Highland Community College for two years, where he played football.  He was a member in the National Guard for two years.  He was united in marriage to Janice Lynn Schuler at the St. Augustine Catholic Church at Fidelity on September 25, 1965.  He worked at the Fairview elevators, foreman for Brown County road crew for 30 years, as well as being a farmer and stockman.  He retired from Brown County on October 27, 2008.  After his retirement he enjoyed gardening, fishing, hunting, mushroom hunting and spending time with family and grandchildren.  He was an avid fan of the Kansas Jayhawks.  He was also a past president of the Kansas Kids Wrestling Club.  He enjoyed accompanying his sons, Mike and Doug and friends to wrestling tournaments throughout the years.


He was preceded in death by his parents; a sister, Phyllis Muccini and a son, Michael James Werner.  He is survived by his wife of 48 years, Jan Werner of the home, a daughter, Angie (Mike) Munoz of Topeka; a son, Doug Werner of Sabetha; four sisters, Patricia (Gary) Meyer of Athens, Ohio, Charllene Beckett of Mariana, California, Eileen Hill of Mi Wuk Village, California and Susan (Jack) Fanning of St. Joseph, Missouri; one brother, Richard (Jana) Werner of Manhattan and five grandchildren, Dillion Lambert of Sabetha, Gabbie Tull of Sabetha, Michael Munoz, Jr. of Topeka, Adrian Munoz of Oklahoma and Mya Munoz of Topeka.


Mass of Christian Burial will be recited on Monday, July 8, 2013 at 10:00 a.m. at the St. Augustine Catholic Church of Fidelity- Sabetha. Visitation will be Sunday 2:00 to 4:00 p.m. with a rosary prayed at 4:00 at the Popkess Mortuary Chapel in Sabetha.  The interment will be made in the St. Augustine Catholic Church Cemetery.  Memorial contributions may be made to a charity yet to be designated sent in care of the funeral home.

To order memorial trees or send flowers to the family in memory of Melvin Werner, please visit our flower store.