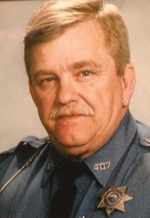 Mike was born October 21, 1953 in Falls City, NE the son of Harry (Ed) and Opal Yost. He graduated from high school at Kaneohe, HI while in the U.S. Marine Corp. in 1973.  Mike enlisted in the U.S. Marine Corp. in 1970 and was honorably discharged in 1976 as an E-4 Corporal of the military police.  He served his country in many foreign countries, including the Vietnam War.

Mike and Carmen (Bartram) married in Sabetha on March 12, 1977 at First Congregational Church.  They celebrated 35 years of marriage together this year.

Mike had several career choices early in their marriage, including plumbing, a/c technician, propane and fertilizer truck driver.  He finally got back to his passion of law enforcement in 1992 at the Nemaha County Sheriff's Office where he has served as the Correction officer for 16 years.

He enjoyed using his auto mechanic skills on their '67 Camaro and his Harley's.  The family shared many Saturdays together at car shows throughout KS and NE in the early years. His unmeasurable knowledge of vehicles and home repairs was always greatly appreciated by family and friends.  On lots of motorcycle trips, Carmen and Mike traveled to many destinations, including Canada.  Frequent trips were made to meet their only child Becky and family for vacations and at their daughter's home in the Dallas area over the past 13 years.

He regularly attended Northridge Church with his wife Carmen.  The family was baptized together in 1996.  Mike had a passion for helping others using his trademans skills in places like Haiti, where he served as part of a mission trip in 2006.  Mike was a member of the Shepherds of the Road Christian Motorcyclists Association, in Hiawatha with his wife and many of his friends.

To order memorial trees or send flowers to the family in memory of Michael Yost, please visit our flower store.