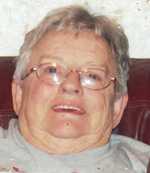 Myra worked for the telephone company in Topeka, then returned to Seneca, and in 1959 began working at the Nemaha County Coop on Main Street as office manager. She retired in 1973.

Myra and Red were active in the Couples Bowling League, the Scotch Foursome (Tues.), and local outings to fish with friends. She was a member of Delta Deck and Tuesday bridge clubs, the United Methodist Women, the Hospital Guild, and the Legion Auxiliary.

Memorial services will be Saturday, April 23 at 2:00 PM at the Popkess Memorial Chapel in Seneca, KS.  A family visitation will one hour prior to the services at the funeral home.

Memorials are being left to the Seneca Free Library, Life Care Center of Seneca or the Gideon’s International and may be sent in care of the funeral home.

To order memorial trees or send flowers to the family in memory of Myra Easton, please visit our flower store.