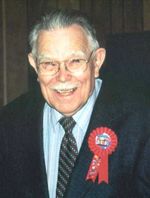 He was born a twin child of Christopher Arthur and Mirtie (Lee) Hoffman on October 31, 1913 in Centralia, KS. He attended school at the Liberty 102 (Hog Corner) School near Centralia, the Centralia Schools, and the Vermillion School through the eighth grade. He later received a diploma of graduation from the Centralia High School, Unified School District No., 380 presented to veterans that served in World War II.

Nub served in World War II in the US Army from Dec. 4, 1943 to Nov. 30, 1945. After his military service Nub returned to Centralia and farmed east of Centralia and worked as a mechanic/parts man for McBratney Case Implement Co. in Centralia and later for Schottel Implement in Seneca, KS.

Funeral services are Saturday June 26, 2010 at 10:30 AM at the United Church of Christ First Congregational Church in Centralia, KS. Rev. Deanna Lewis will conduct the service. Casket bearers will be Brad Shumaker, Todd Shumaker, Chris Shumaker, Austin Jones, Stephen Brucken, Eric Shumaker, Kenton Russell and Lonn McClary. Burial will be in the Centralia Cemetery with Military Honors. There will be a family visitation Friday evening from 6:30 - 8:00 PM at the Hayes-Popkess Funeral Home in Centralia, KS. Memorials are being left to the Talking Books Program or the UCC 1st Congregational Church in Centralia and may be sent in care of the funeral home.

To order memorial trees or send flowers to the family in memory of Norbert Hoffman, please visit our flower store.