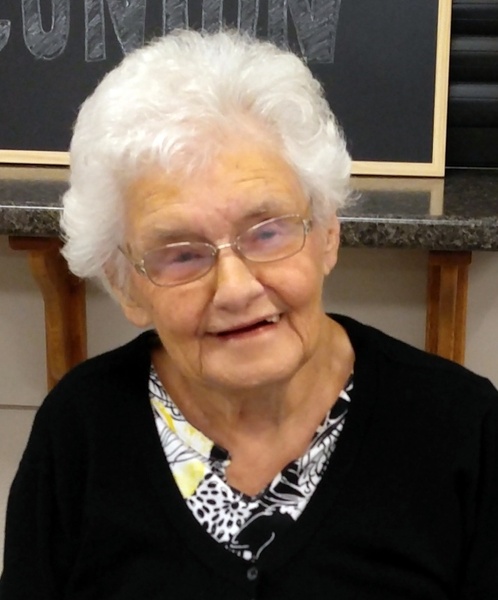 Norbertine was born October 19, 1922 in Kelly, KS to Frank H. and Elizabeth (Steinlage) Niehues. She graduated from Kelly High School in 1941. Norbertine attended Mount St. Scholastica College for one year, and entered nurses training in Sabetha at St. Anthony’s School of Nursing from 1942 until 1945. After becoming a registered nurse, she worked at St. Luke’s in Kansas City and later worked at the Seneca Hospital from 1946 until her retirement in 1984. Following her retirement, Norbertine worked for Crestview Manor.

After retirement, Norbertine enjoyed volunteering at Crestview Nursing Residential, spending time with her grandchildren, reading, and crocheting. Throughout her life her faith was important and she ministered to many people, even when she was home bound herself she would write and call others with encouragement and prayer. After becoming widowed, Norbertine and her sister Frances spent many hours in each other’s company and recited the chaplet each night together.

She was preceded in death by her parents; her husband, Dale Miller on June 15, 2010; her brothers, Herbert and Ferdinand; her sisters, Anita (2 yrs. old), Florence, Bernadine, and Rita.

Mass of Christian Burial will be Tuesday, February 6, 2018 at 11:00 a.m. at the Sts. Peter & Paul Catholic Church in Seneca, KS. Rosary will be recited Monday, February 5, 2018 at 7:00 p.m. at Sts. Peter & Paul Catholic Church. Family will greet friends from 10:00 a.m. to 4:00 p.m. at the Popkess Memorial Chapel in Seneca, KS. Private family inurnment will be held at a later date. Memorial contributions may be made to the Sts. Peter & Paul Grade School or Crestview Nursing & Residential or the Nemaha Valley Community Hospital, sent in care of Popkess Memorial Chapel, 814 Castle, Seneca, KS 66538.

To order memorial trees or send flowers to the family in memory of Norbertine Miller, please visit our flower store.