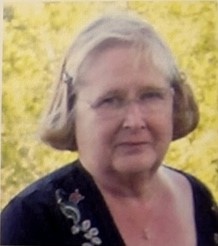 Patricia was born on March 21, 1944, in Fort Scott, Kansas, the daughter of Ora Lynell Stuart and Rama Morene (Alexander) Stuart.  She grew up attending The Church of God (Independence Holiness) in Fort Scott.  Patricia graduated from Fort Scott High School, and throughout her school years, learned to play the violin.

Patricia was united in marriage to James Robert Burton on March 31, 1962, in Harrison, Arkansas.  Four children, Stuart, Robert, Christina, and Jennifer were born to the union.  After raising her family, she earned her Dietary Manager Certification at Washburn University.  Pat applied these skills serving and caring for others while employed at the Sabetha Manor Skilled Nursing Facility.

Pat loved spending time with her grandchildren and devotedly attended their school-related activities.  She also enjoyed cooking, canning, gardening, and bird watching, especially the many hummingbirds just outside her porch.  She regularly attended Crossroads Wesleyan Church in Sabetha, Kansas, where she often served others through her cooking and thoughtful gifts.

Patricia was preceded in death by her parents; and a son, Robert David Burton, on July 6, 2013.

Funeral service will be Monday, December 20, 2021, at 11:00 a.m. at the Crossroads Wesleyan Church in Sabetha.  Prior to the service, a visitation will be held from 9:30 a.m. to service time at the church.  The interment will be made in the Morrill Cemetery in Morrill, Kansas.  The family requests that mask be worn during the services at the church.  Memorial contributions may be made to the Crossroads Wesleyan Church sent in care of Popkess Mortuary, 823 Virginia, Sabetha, Kansas 66534.

To order memorial trees or send flowers to the family in memory of Patricia "Pat" Burton, please visit our flower store.