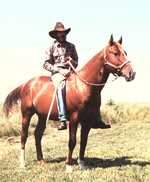 Ralph was born October 22, 1941 the son of Howard and Tressie Feister Clark in Scottsbluff, NE.

Ralph loved animals and was a gifted when it came to training horses. Ralph worked as a rancher, cowboy, horse breeder, trainer, farrier (horseshoer) and saddle maker.

He met his wife Diana Womack while they both were working on a horse ranch in Colorado. They were married on October 22, 1981 in Texas.

Ralph was a member of the National Rifle Association and American Quarter Horse Association.

Ralph is survived locally by his wife Diana (Womack) Clark of their home, a son Shane Jenkins of Oklahoma, a brother, sister, and many nieces and nephews.

Memorial Services will be Saturday Nov. 20 th at 1:30 PM at the United Methodist Church in Vermillion, KS. Ralph’s ashes will be buried on the family farm at a private family service at a later date.

Memorials may be left to Salvation Army or the NEKCap in Seneca, KS.

To order memorial trees or send flowers to the family in memory of Ralph Clark, please visit our flower store.