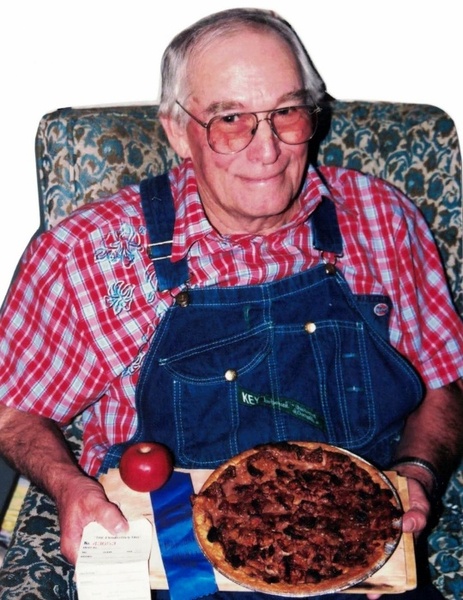 R alph Mars of Vermillion, KS passed away November 25, 2019 at 86 years old, at the Good Samaritan Home in Olathe, KS due to advanced stages of sepsis, resulting in renal failure.

Ralph was born August 19, 1933 in the Neuchatel Township. He lived on his family farm, previously located east of B Road and 32 Road, in Nemaha County. He attended the Concord Grade School House, completing an 8th grade graduation, and later earning his GED. He attended the Manhattan Technical College for Welding.

He served in the US Army, as a Private 1A class, serving from 1954 to 1956 in the 5th Armored Division, Company A, 46th Armored Infantry Battalion, SIGC Unit, stationed in Germany. He received 3 medals in service for Good Conduct, National Defense Service, and Army Occupation of World War II. His job in the Army was as a Wireman Communication/Telephone Operator, calling in ordinance for tanks. While in the army he went to Rome and was blessed by Pope Leo. Ralph was a member of the Frankfort, KS American Legion Post #181.

After the Army, Ralph worked for 12 years with the Union Pacific Railroad as a Communication Lineman running telephone line. This work took him throughout Kansas, Nebraska, Colorado, Montana, Oregon, Idaho, Utah, and Wyoming. This is where he met is former wife, Barbara Selena Cook to whom he was married from 1960 to 1973. To this union was born two children, Stanley (1961) and Synthia (1962). Ralph worked in custom hire to cut, bail hay, and combining crops. He began farming full-time in 1968 raising cattle and hogs, as well as growing milo, oats, wheat, and hay. He had had once owned up to three properties in Nemaha and Pottawatomie Counties. Ralph moved to Vermillion in 1974, residing there for 41 years until August of 2014 when he suffered a massive stroke, which paralyzed his left side. After a three month stay at the Topeka VA Medical Center, he was moved to a nursing home in Olathe, to be close to his daughter.

Ralph said that fishing on the Blue River was his favorite pastime. In the 1960’s, he often enjoyed fishing with cousin Richard “Dick” Mars, sister Lucille, cousin Darlene (Mars) Costa, and his own family. He would bird hunt with Cotton Florence, Wayne Chadwick and Dick. His favorite pets were a palomino horse he named Goldenrod, and a border collie named Keene. Ralph was fond of cars. Some of the more unique cars he owned was a 1931 Model-A car, a light blue 1957 Chevy Belair, a light yellow 1965 Ford fastback Mustang, and a starlight-black 1979 Pontiac Trans-Am. His personal activities since childhood also included hunting, and trapping. Later he enjoyed dancing, listening to music, metal detecting, natural treasure hunting, genealogy, and bow-fishing.

He was known by many as good-natured, fun-loving, having a sense of humor, loved hearing and telling jokes, making up jokes, and playing pranks. Laughter was his medicine for himself and his gift to others. The nursing home staff loved him dearly for his personality, jokes, and teasing.

His relationship with his children changed over the years, from strict parent to calm counselor, to friend and an encourager. He was proud of them and all that they had accomplished on their own in life. He stayed in touch with them, and always asked about his grandchildren, and was connected to each of them. He was able to give his love and blessing to his family before his passing, telling us to “follow your bliss” in life, and “be patient in striving for success.” At the time of his passing his daughter was with him, and had just sang him “O Holy Night” after which he opened his eyes one last time, looked at her and passed knowing he was loved.


Ralph was of French and German decent, and was preceded in death by parents, Bernice (Surdez) and Roland E. Mars; his grandparents, Oscar and Mattie (Morrison) Surdez, and George and Minnie (Linderman) Mars; his sister, Lucille (Mars) Chadwick; his brother-in-law’s, Wayne Chadwick and Cotton Florence.

A beloved father, he leaves behind family: Stanley (Tiffany) Mars of Estes Park, CO, and Synthia (Kenny) Wilson of Olathe, KS; grandchildren, Kandace (Mars) Dane of Wamego, Ricky Gant and Tammy Corum both of Topeka, Julie Kolterman of Centralia, CJ Barleen and Cade Barleen of Colorado, and Selena “Len” Wilson and Clayton Wilson of Olathe; and his younger sister, Florence of Onaga.

Funeral service will be Friday, December 6, 2019 at 2:00 p.m. at the Centralia Community Church East in Centralia, Kansas. Dinner to follow services at 5:00 p.m. in the church basement for friends and family. Visitation will be Thursday, December 5, 2019 from 5:30 to 7:30 p.m. at Popkess Memorial Chapel in Seneca. Interment will be made in the Neuchatel Cemetery with military honors conducted by the Frankfort American Legion Post #181. Memorial contributions may be sent in care of, Synthia Wilson, 1524 E. Sunvale Drive, Olathe, KS 66062.

To order memorial trees or send flowers to the family in memory of Ralph Mars, please visit our flower store.