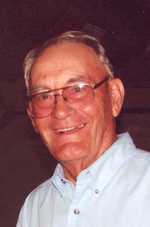 He was born October 8, 1931, in Wetmore, KS the son of Clarence and Dorcas Petry. He graduated from Centralia High School in 1949, where he lettered in football and track. Following graduation, Raymond began farming. In 1952, he married Marilyn Lucille Moyer.

Over the years Raymond and Marilyn owned and farmed land in Nemaha and Brown counties. In his 41 years of farming, he saw many changes in the industry. He started with a small Ford tractor. Raymond was a progressive farmer for that time. He was one of the first in the area to use insecticides, herbicides and fertilizers. His motto was “if we take care of the land, it will take care of us”. By the time he retired in the early nineties, farming had evolved to the computerized age. In 1970, Raymond was honored with the Carnegie Hero Fund Award for saving the life of Allen Wayne Steiner, following a crop dusting plane crash.

When he wasn’t farming, his time was filled with coaching youth baseball in Sabetha and youth softball in Centralia. Raymond was an avid golfer and was a member of the Seneca Golf Club, Centralia Lions Club and the First United Methodist Church, Centralia. He enjoyed hunting, fishing, camping, waterskiing, family snow skiing trips, listening to country music, dancing and watching Western movies. He helped with committees for the Centralia Community Center and the annual 4 th of July tractor pull. He was very thrilled with his Bi-centennial 4 th of July awards of Apple Peeling Queen and the Ugliest Beard contest winner.

For many years, Raymond enjoyed traveling and meeting new people with Marilyn in their RV throughout the United States, Canada and Mexico. He particularly enjoyed the Southwest. When they were not traveling, he enjoyed watching their grandchildren compete on various sports teams and participate in activities.

Funeral services are planned for 11:00 A.M. Wednesday, November 24 th at the First United Methodist Church, Centralia. The Reverend Michael McKee will officiate. Visitation will be conducted one hour prior to the service in the church sanctuary.

Memorial contributions are suggested to the Leukemia & Lymphoma Society and may be sent in care of the Hayes-Popkess Funeral Home, 814 Castle, Seneca, KS 66538

To order memorial trees or send flowers to the family in memory of Raymond Petry, please visit our flower store.